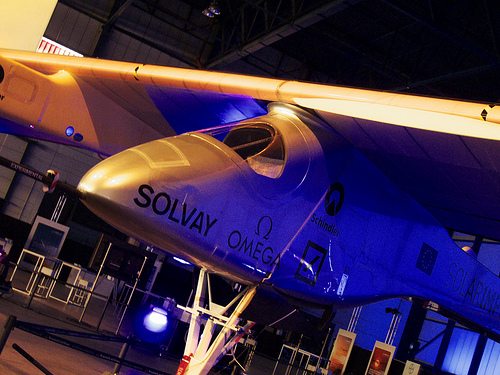 A new solar powered aircraft, the Solar Impulse 2, will attempt to fly around the world next year without any fuel. The plans will see the plane fly for five consecutive days in March 2015.

The plane gathers all the energy it needs to power the engines and recharge the plane’s batteries from solar cells, making it possible to fly through the night. The original Solar Impulse flew from San Francisco to Phoenix in May last year as part of its first step to cover the entire length of the US. When the aircraft flew from the west coast to the east coast it marked the first time the journey had happened without fuel.

Bertrand Piccard, chairman of Solar Impulse, said, “When Solar Impulse was born 12 years ago, and we could show the enormous wings and the light weight of its structure on computer designs, all the specialist in the world of aviation started to laugh.

“Today, this airplane exists. It’s the most incredible airplane of its time. It can fly with no fuel, day and night, and we hope it can make it around the world.”

The new plane has been redesigned to make it lighter and more aerodynamic and as a result it is now more energy efficient.

Blue & Green Tomorrow’s Guide to Sustainable Transport 2014 looked at future technologies, including the Solar Impulse.  The designers say the project’s primary purpose is not to revolutionise aviation, but to demonstrate the potential of renewable technology.