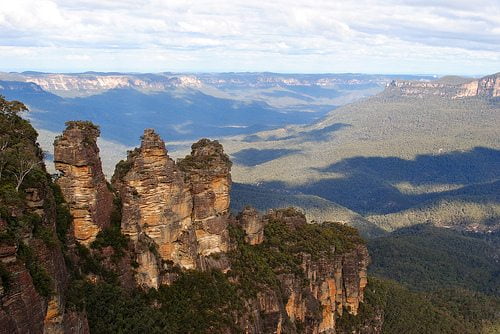 The Blue Mountains are one of Australia’s premier holiday destinations. Characterised by their striking natural wonders, dramatic scenery and inspiring stories, the local environment is brought to life to create a fascinating and sustainable place to visit.

A mountainous region of New South Wales, the Blue Mountains are situated to the west of Sydney, less than two hours from the city centre by train. Their name is believed to originate from the blue haze that covers the nearby forests and bushland, which forms due to the release of eucalyptus oil in the leaves which mixes with the natural sunlight.

The Greater Blue Mountains Area has been an official UNESCO World Heritage Site since 2000 and makes up a large proportion of the Blue Mountains region. The area is almost exactly the same size as Qatar, at 11,400 sq km. Its distinctive forested landscape contains seven national parks and one conservation reserve, Jenolan Karst Conservation Reserve.

Katoomba is the largest and most popular resort town up in the mountains, and this is located within the designated grounds of the Blue Mountains national park. A short hop from the town is the iconic Three Sisters rock formation; the Echo Point lookout provides mesmerising panoramic views into the surrounding canyons and valleys, like the Jamison Valley. The grand five star Lilianfels Blue Mountains Resort and Spa is a very attractive option if you fancied staying near to Katoomba.

The Blue Mountains national park is perfect for hiking and sightseeing, boasting an impressive 140km of walking trails, heritage tracks and lookouts to explore. A trip on the Zig Zag Railway, described as an “engineering masterpiece of the 19th century” by Destination NSW, enables travellers to take a ride in a vintage steam train and follow the original line from Bell to Lithgow.

If you wanted to retreat off the beaten track, then the town of Yerranderie could be the destination for you. Yerranderie is a former silver mining town situated nearby another of the national parks, the Kanangra-Boyd national park. This small, isolated town offers tourists a chance to experience Yerranderie’s mining heritage and abandoned mining relics of the past. Miners’ cottages and other local establishments such as the post office are now restored lodges. Many of the renovated cottages and lodges are powered by solar energy.

One of the oldest cave systems in the world, Jenolan Caves fabulously complements the ecology and environment of the Blue Mountains. Specialist events and guided tours of dark and show caves and chambers can be undertaken, including ghost tours and cave concert events.

The Blue Mountains’ abundant natural capital, substantial landmarks and tranquil forests allow the destination to flourish and prosper sustainably and responsibly. Long may it continue.

What the regional tourist board says about visiting the Blue Mountains

“The reality is that the overwhelming majority of visitors want to go to a sustainable bushland and engage in low-carbon nature-based experiences”.