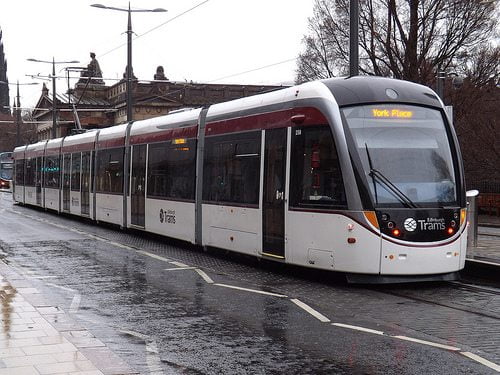 Edinburgh’s overdue and over-budget tram system took its first paying customers on Saturday, with the ribbon now officially cut on a better and more sustainable transport network for the city.

Transport minister Keith Brown commented, “The people of Edinburgh and local businesses will be relieved to start seeing the real benefits of a modern tram system.

“Although today is clouded by what happened in the early stages of the project, since being involved we have worked with the council and the contractor to get it back on track. The tram link will support employment and much improved local, national and international links.”

As well as delivering economic benefits to the area, the tram will also provide efficient and sustainable transport system. The trams are powered by electricity, and will have zero on-street carbon emissions and regenerative breaking, which means the energy that would otherwise have been waster can be used.

Air quality in the city is also expected to improve as a result of encouraging people to shift from car to tram use. Air pollution has recently hit headline in the UK and MPs have launched an inquiry into the issue, which has been described as the “biggest public health risk after smoking” by Public Health England.

Richard Dixon, director of Friends of the Earth Scotland, said, “Trams are very efficient and produce zero emissions on the road so they will help reduce Edinburgh’s climate change emissions and tackle the city’s air pollution problems.”

He also added that the council should consider extending the line to Leith and beyond, stating it would be “crazy to miss the opportunity to complete a comprehensive tram system in the city”.

However, Lesley Hinds, transport convener councillor at City of Edinburgh council, said there are no current extension plans and it would be inappropriate to do anything until the current service has been reviewed.