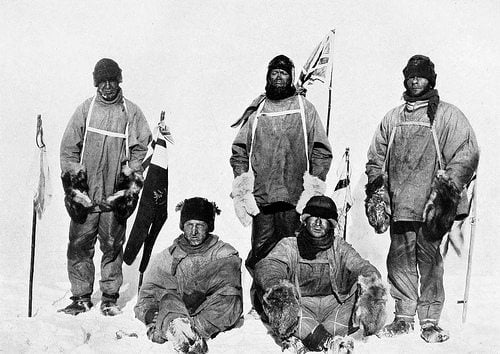 On this day 102 years ago, Sir Robert Falcon Scott and the Terra Nova expedition arrived at the South Pole. Having finished behind Roald Amundsen in a race, the polar party – of Scott, Edward Wilson, Lawrence Oates, Edgar Evans and Henry Robertson Bowers – perished on their return journey.

Financed by the Royal Geographical Society, the expedition intended to be the first to reach the South Pole – thus conquering the world’s only untamed region at the time. The expedition is perhaps more recognised for its recovered documentation.

Scott’s journals, which recounted the expedition from beginning to end and gave a personal account of the polar party’s demise, were recovered on Scott’s frozen body several months after Amundsen had reached the pole first.

More recent trips to Earth’s most southerly point includes that of Ben Fogle and James Cracknell, who competed against other entrants to reach the South Pole in 2010. Last year. Meanwhile, only last year, Sir Ranulph Fiennes had to withdraw from a six-month winter expedition across the Antarctic due to severe frost bite.

Robert Falcon Scott and the polar party's ship, Discovery, is now a visitor attraction in her home, Dundee

There has been an increasing frequency of Antarctic visits in recent years, primarily due to tourism. Since the 1960s, private trips have been available to sightsee the Antarctic boundary. For between $3,000-30,000 (the upper amount being almost the exact figure it took to fund the entire Terra Nova expedition), customers can fly from Australia to Antarctica, viewing the world’s most southern continent.

Originally, expeditions were embarked on for scientific exploration and discovery. The former still holds true nowadays, with many trips to Antarctica focusing on learning more about climate change.

Studying the Earth’s coldest regions and the rate at which they are warming gives a good understanding of climate shifts across the globe. Weather stations manned all year round are now situated across the continent, monitoring ice melt and sea levels.

Meanwhile, the ozone hole, first noticed by the British Antarctic Survey in the 1960s, is also continually monitored. Its depletion received much interest due to its connection with increased human fossil fuel emissions and chlorofluorocarbons (CFCs).

Over Christmas and into the new year, the Russian Akademik Shokalskiy vessel became stranded in thick ice while attempting to reach the Antarctic to study climate change. A rescue mission took place to remove the scientists from the ship. The cause of this was attributed to unexpected ice densities, which were predicted to be much lower than they actually were.

Antarctic ice sheet levels have been the focus of many studies since the 1970s. But while sea ice around its northern cousin the Arctic has fallen to its lowest ever levels in recent years, the Antarctic is experiencing an entirely different trend, with sea ice reaching record highs in 2013.

Scientists have attributed the difference to the regions’ contrasting geographies (the Arctic is mostly ice and surrounded by land, whereas Antarctica mostly land and surrounded entirely by ocean) with some researchers saying the Antarctic’s strong winds are to blame for the increase in its sea ice. But while the Antarctic may be gaining sea ice, it is rapidly losing land ice, meaning it is certainly not immune to the warmer world we are creating.

With manmade climate change likely to see warmer winters and summers, and with some estimating the global population will increase to over 10 billion by 2050, a better understanding of ice extent decrease is vital.

The Arctic and Antarctic are beautiful, pristine and vulnerable regions and it would be a great shame if Robert Falcon Scott and the brave polar party’s legacy was rubbed out because of humanity’s commitment to polluting sources of energy.

Joseph Iddison is a master’s student at the University of Leicester. Having graduated from the same institution with a degree in English, he is currently studying for global environmental change MSc.