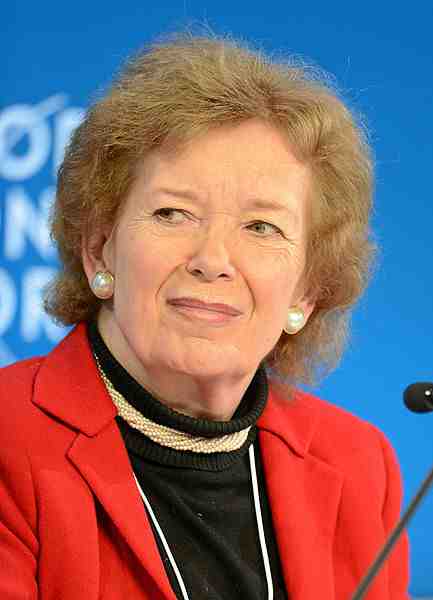 Former Irish president Mary Robinson has said the fossil fuel divestment campaign is a “shining example” of what must be done in the fight against climate change.

Robinson, the first female president of Ireland and a former UN high commissioner for human rights, also set up the Mary Robinson Foundation for Climate Justice.

Writing in an article for the Guardian, Robinson argued that the extreme flooding recently experienced in the UK will be nothing compared to the “weather shocks” that future generations will face if the impacts of climate change get worse.

She particularly praised the young activists playing a key role in the divestment campaign who are demonstrating the need for economic change.

“This is how inter-generational equity can be achieved: promoting a new investment model that responds to the risks posed by climate change,” she wrote.

“By avoiding investment in high-carbon assets that become obsolete, and by prioritising sustainable alternatives, we build capacity and resilience, particularly for more vulnerable people – while lowering carbon emissions.”

The divestment movement – which calls on investors to ditch their holdings in companies that mine or sell fossil fuels on financial grounds – has gathered momentum in recent months.

Many institutions, including international universities and churches have recently debated the moral and financial cases for avoiding exposure to fossil fuel stocks.

The movement urges investors to substitute such investments for more sustainable alternatives.

Referring to estimates from the International Energy Agency, Robinson warned that divestment in low-carbon technologies needs to rise rapidly, reaching $1 trillion (£599bn) by 2030 in order to keep global warming within the generally agreed target of 2C.

“Meanwhile, the temptation to invest in coal, oil and gas is heightened by countries’ fossil fuel subsidies that, worldwide, amount to $1.9 trillion (£1.14tn) a year,” Robinson continued.

“Such subsidies enable the fossil fuel industry to perpetuate the notion that renewable energy is more expensive.

“Of course, in withdrawing any fossil fuel subsidies, absolute consideration has to be given to accessing energy for the poorest, therefore investment has to be made in sustainable energy alternatives.”