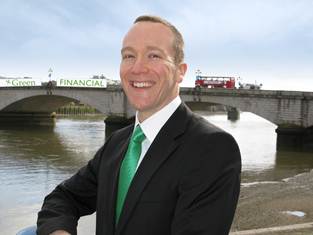 Green by name, green by nature: Helping people do what they can, where they can

Ian Green, director of Green Financial Advice, spoke to Alex Blackburne about his role in giving clients an ethical choice when it came to their investments.

If you’re interested in getting into the financial advisory world and your surname is ‘Green’, you must think that it’s the universe’s way of silently nudging you towards ethical investment.

Ian Green, director of Green Financial Advice, spoke to Alex Blackburne about his role in giving clients an ethical choice when it came to their investments.

If you’re interested in getting into the financial advisory world and your surname is ‘Green’, you must think that it’s the universe’s way of silently nudging you towards ethical investment.

“I really am called Ian Green. It is my name”, confirms the director and founder of London-based financial planners, Green Financial Advice.

“Green by name, green by nature”, he continues, playing on the coincidental nature of his surname, his ethics and his profession.

With 16 years’ worth of experience as a financial adviser, Green offers clients a mixture of both ethical and more mainstream funds.

“Ever since I first started, I was always aware of things like the Friends Provident Stewardship Fund, for use within pensions”, he says.

“I’ve been aware of, and used, ethical funds for just about as long as I’ve been a financial adviser.”

‘Make money and make a difference’

Green Financial Advice is a fee-based advisory firm, comprising of five employees, of which Ian Green is the only adviser. The firm primarily operates in the pre and post retirement market, the wealth management market and tax and estate planning.

When it comes to ethical investment, Green refers to the National Ethical Investment Week slogan, ‘make money and make a difference’.

“If you can make your money do good stuff for others while it’s working for you, I think that’s a good idea”, he states.

“What I always think is, as an individual, in terms of looking after the environment and being green, I like to do what I can, where I can.”

Doing ‘what you can, where you can’ is a running theme throughout my interview with Green, who is quick to admit that he’s not able to be 100% green, 100% of the time himself.

But then again, who is?

“A client once described doing what you can, where you can as a common sense approach”, he explains, “and it’s that approach we bring to people’s investments.

“We’re not suggesting you have to be entirely green in your approach, because it’s really hard to be entirely socially responsible in your lifestyle.

“If you buy organic or fair trade food, it’s often in surplus packaging, even if you use your own bags to carry it home.

“We apply that approach to investing as well. We help clients to do what they can, where they can.”

Investing ethically does not compromise performance

There’s something refreshing about Green’s ethos, especially since he is a financial adviser.

He’s right – it is difficult to live a 100% ethical lifestyle, but choosing ethical investment and living a normal life, is much more friendly and sensible than having your money tied up in unethical funds, whilst using energy-saving light bulbs and driving hybrid cars, for example.

It’s about getting your priorities sorted and achieving a healthy balance.

Like several of the previous IFAs that Blue & Green Tomorrow has spoken to, Green is quick to dismiss “the persisting myth that investing ethically means you’ve compromised performance”.

“An ethical fund is a fund, and it has got as much chance in outperformance or underperformance as anything else”, he instils.

Choosing an ethical investment fund isn’t an easy process, though.

In the past couple of weeks, Blue & Green Tomorrow has profiled two funds – WHEB AM’s Sustainability Fund and Kames Capital’s Ethical Equity Fund – but there are many to choose from in the sector.

“From a consumer’s perspective, it’s no good just picking a fund because it’s got some kind of green or ethical label on it, in the same way that if you go to a supermarket, just because something says ‘low fat’ on it, it doesn’t mean it’s not high in sugar.

“It’s the same kind of thing with funds: just because they’ve got an ethical or green sounding name, it doesn’t necessarily mean it will fit your own criteria.”

Green’s answer to the now customary Blue & Green Tomorrow question regarding who he’d choose to be stuck with if stranded on a desert island reflected his logical approach to giving financial advice.

He chose Microsoft founder, and billionaire philanthropist, Bill Gates to accompany him.

“While we are stranded”, Green explains, “he’d be great conversation given the life he has led, from building Microsoft to his charitable foundation, and I think he’d be clever enough and well-connected enough to work out a way to save us or have us rescued”.

Ian Green’s ethical philosophy is not only refreshing, but it’s entirely realistic and appropriate for the majority of 21st century individuals.

As previous interviewee, Lee Smythe, affirmed, “People are good”, and it’s up to advisers like him and Green to transmit the ethical possibilities to a wider audience.

“Whatever the client wants by way of ethical investment requirements, I’ll be happy to help them to implement”, finishes Green.

Just make sure that if you want a blue and green tomorrow, you consider ethical investment.

If you would like to know more about ethical investment, contact Green Financial Advice, or complete our form and we’ll connect you with a specialist ethical adviser.

Green Financial Advice is based in Putney, in the London borough of Wandsworth.

Famous for being the starting point of the annual University Boat Race, Putney was described by J. C. Geikie in his 1903 book, The Fascination of London, as “one of the pleasantest of the London suburbs”.

It is home to some of the capital’s most beautiful parks and open spaces, boasting 1,600 acres grassland, commons, allotments, and cemetery land – “the largest proportion for any inner London authority and almost five times the size of Hyde Park”.

Clement Attlee, the former British Prime Minister, best known for introducing the welfare state and granting India its independence from the Empire, was born in Putney in 1883.

The Antarctic explorer, Lawrence Oates, who in 1912 formed part of Captain Scott’s now infamous final, tragic expedition, was born in Putney in 1880. Oates is perhaps best remembered for the nature of his death – “I am just going outside and may be some time” he said, before stepping foot out of his tent and into a blizzard.

Meanwhile, former Chelsea and England goalkeeper, Peter Bonetti, and the first man to sail single-handed and non-stop around the world, Robin Knox-Johnston, also cite Putney as their place of birth.

In terms of sustainability, Wandsworth Council has a very keen movement. Its Environmental Ambition Statement relays the key targets, with the ultimate aim for the borough to be, “A community of global citizens living within environmental limits in an attractive, high quality local environment”.

Its projects seem to be working, too, with the local authority’s carbon emissions falling steadily between 2005 and 2009, from 1,483kt of carbon dioxide to 1,207kt, whilst its emissions per capita has also fallen by over a tonne in that period, from 5.3 to 4.2.