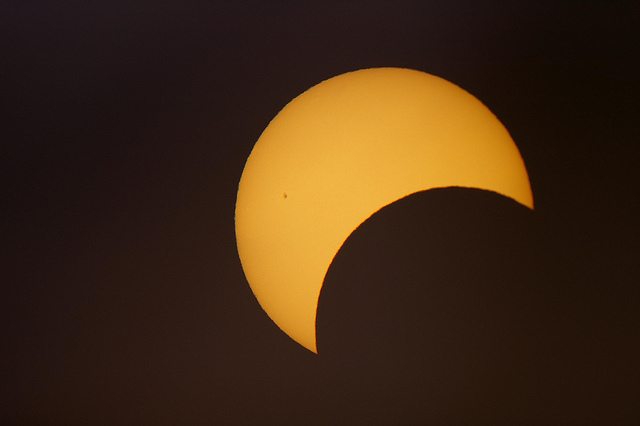 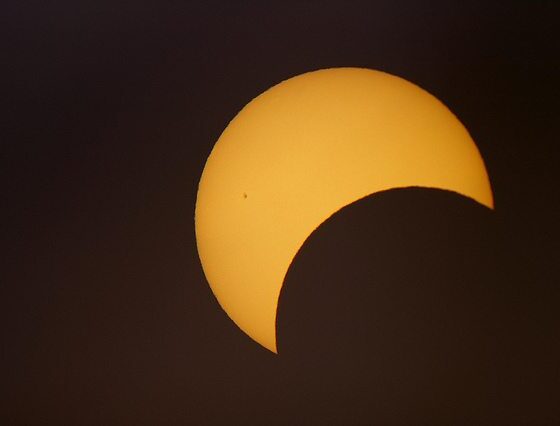 Partial eclipse 2015: the source of all our power

As we get ready to put out our pinhole cameras, colandars or don thick, dark perspex glasses, the moon is racing towards an intersection with the sun, creating a partial eclipse in parts of the UK.

The Sun’s distance from Earth is about 400 times the Moon’s distance, and the Sun’s diameter is about 400 times the Moon’s diameter. This means the disk of the moon can completely eclipse that of the sun, leaving just the Sun’s atmosphere, the corona, visible. Between two and five total eclipses occur every year with 240 eclipses on average every century.

Tomorrow we’ll be under a partial eclipse with totality being just North West of the British Isles. The South East will enjoy an 85% eclipse whereas the North West of Scotland will enjoy a 95% eclipse. It touches Penzance at 9:23 and leaves Lerwick at 9:43 so we have twenty minute window to view this awesome alignment of a star, a planet and a moon. But don’t look at the sun.

2. 109 Earths would be required to even fit across the Sun’s disk, and the Sun’s interior could hold over 1.3 million Earths.

3. Within the core of the Sun, the temperature (15,000,000 K) and pressure (340 billion times Earth’s air pressure at sea level) of it is so intense that nuclear reactions actually take place.

5. The earth receives more energy (3.85 million exajoules per annum) from the sun in one hour than it uses in one year. The amount of solar energy reaching the surface of the planet is so vast that in one year it is about twice as much as will ever be obtained from all of the Earth’s non-renewable resources of coal, oil, natural gas, and mined uranium combined.

6. The process that takes this energy to the surface of the sun following complex stages is called convection.

7. This energy, released as heat as well as light, takes a million years to reach the surface.

8. The Sun also emits low density streams of particles, also known as the solar wind. These winds blow through the solar system at 450 km/sec and consist mostly of electrons and protons.

9. The Sun consists of the core, photosphere, chromosphere and corona, each with differing temperatures and components.

10. Existing just over 4 and a half billion years, it has burnt up about half of the hydrogen in its core. This leaves the Sun’s life expectancy to 5 billion more years, at which time, the Sun’s elements will “swell” up, swallow Earth, and eventually die off into a small white dwarf.

“We are like tenant farmers chopping down the fence around our house for fuel when we should be using Nature’s inexhaustible sources of energy — sun, wind and tide. … I’d put my money on the sun and solar energy. What a source of power! I hope we don’t have to wait until oil and coal run out before we tackle that.” Thomas Edison (1847–1931) in conversation with Henry Ford (of Ford Motor Company) and Harvey Firestone (of the Tire Company) in 1931.