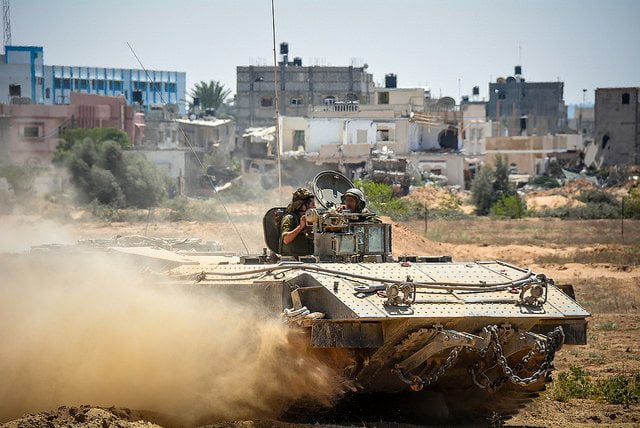 Conflict has always been a lucrative business, as battles tend to use and destroy a lot of things that need to be replaced. But as the human cost of these conflicts becomes increasingly obvious with 24-hour rolling and online news, now more than ever we can assess the role our nation plays in supplying the world’s conflicts.

Britain is currently in the process of reviewing its £8 billion sales of weapons and equipment to Israel, in the light of the currently suspended military campaign in Gaza.

The review, argues Downing Street, is to ensure that export licenses to Israel granted to British weapons and equipment manufacturers were “appropriate”.

Appropriate is defined by the use of weapons and equipment, ensuring in particular that they were not used for internal repression or to provoke further escalations of conflict.

The contracts in question primarily involve the trade of cryptographic software and military communications, but also weapon parts, too.

However, the identity of the primary recipients of UK arms last year suggests that the government is not enforcing sufficient scrutiny of appropriateness, on a market worth billions.

Both Saudi Arabia and Egypt, two nations whose governments use a militarised police or other forms of internal oppression, have been highlighted as the two largest markets for UK arms sales.

Last year, Saudi Arabia received £1.6 billion worth of military exports from the UK, including explosive charges, equipment for the assembling of machine guns, CS hand grenades, equipment for water cannon, tear gas and other forms of crowd control kit.

Saudi Arabia is a country of profound human rights violations. Some of these include the persecution of women, lesbian, gay, bisexual and trans-gender people, but also has a track record of using numerous anti-terror laws to imprison human rights activists and journalists.

Saudi Arabia is also one of the few remaining countries left on the planet that still retains legislature against the practice of witchcraft, alongside Cameroon, which it still uses to burn accused women alive.

Egypt, which received £51 million worth of UK arms, including small arms like machine guns and pistols, also received equipment for military vehicles and aircraft.

The North African nation has just survived a civil war and military coup, which has now led to the state-sanctioned execution of hundreds of Muslim Brotherhood members whom the military blame for the origins of the crisis.

The same military has just imprisoned three journalists from al-Jazeera English for ten years, for apparently conspiring with the brotherhood – a court case that has been internationally condemned and led to a global outcry.

Both of these countries, and others such as Libya, whose regimes are all on the Foreign Offices ‘at concern’ list, send representatives to British arms events, like the Defence and Security Equipment International (DSEI) fair.

The fair is backed by the UK Trade and Investment Defence & Security Organisation (UKTI DSO), which supports the event both politically and financially, sometimes offering British Army personnel to demonstrate the weapons.

It is quite obvious that the difference between what is ‘appropriate’ and what is not is in the eye of the beholder. Israel’s campaign in Gaza, which has recently led to the resignation of Cameron’s cabinet minister Baroness Warsi, has highlighted the UK’s hesitance to condemn the Israeli government for its use of deadly force in highly populated areas.

On Twitter, the minister said, “With deep regret I have this morning written to the prime minister & tendered my resignation. I can no longer support government policy on Gaza”.

The UK government still remains steadfast in blaming Hamas for initiating the conflict, by firing rockets into Israeli territory, which is defended by the world’s most advanced anti-missile system – the Iron Dome.

However, the conflict between these two states has been a long and complex affair, with clearly divided sides that defend strong positions. Israel accuse Hamas of using human shields by placing rocket launchers within schools and hospitals – while Israel fails to limit the cost of civilian lives, including hundreds of innocent children.

Regardless, supplying a country with arms or equipment that is being used to sustain or provoke further escalations of conflict goes against the UK’s defining measures of what is or is not “appropriate”.

Non-governmental organisations like the Campaign Against Arms Trade (CAAT), have expressed particular concern with the UK’s supplying of Israel with components for the Israeli Defence Forces’ (IDF) Hermes drone, as well as one UK company selling components for Israel’s main battle tank.

CAAT, who uncovered the information regarding UK arms sales to Israel, has called for an end to the “embarrassing” nature of the UK arms export industry.

Andrew Smith, a spokesperson for CAAT, said, “For far too long the UK foreign policy has been one of arms control by embarrassment.

“Why should it take a humanitarian crisis before the government stops promoting and supporting arms sales to tyrants?”

The UK government also recently came under increased pressure by MPs criticising arms sales to Russia in light of the shooting down of Malaysian Airlines flight MH17 over eastern Ukraine, by pro-Russian separatists.

Russia has allegedly been supplying the rebels in their fight against government troops for independence and is now facing an EU and US trade embargo, regardless of them being customers of both UK/EU weapons.

Britain has also been criticized over the sale of sarin gas ingredients to Syria, with civilians feeling the consequences of its use as Syrian leader Assad approved its use in cities. His government, in an attempt to retain control as the country fell into devastating civil war, has been accused of breaking a multitude of human rights laws – both before and during the conflict.

The UK claims to uphold a rigorous and robust arms control policy that sets it apart from the rest of the world, but this does not seem to be the case.

It is, however, absurd to expect anything different, as conflict is the primary need in an arms industry. Moreover, defining the sales of weapons that are fundamentally used to kill as “appropriate” is intellectually dishonest.

Encouraging divestment from the arms trade from all British institutions is a step in the right direction, and reusing those engineering skills for something positive, a worthy result.

The casualties in Gaza, which was highlighted by Jon Snow’s emotional appeal on Channel 4 after his return from the strip, demonstrate why. The violence has primarily affected children, as a large portion of the population is “unbelievably young.”

The current death toll stands at over 1,800 people, primarily civilians. 400 of which are child casualties, with over 8,000 people injured. Israeli military have confirmed that over 65 of its soldiers have died, although Hamas dispute this, suggesting the figure is nearer to 150. Three civilians have died in Israeli territory since the conflict began.

More often than not it is the innocent who suffer from this highly inappropriate trade.