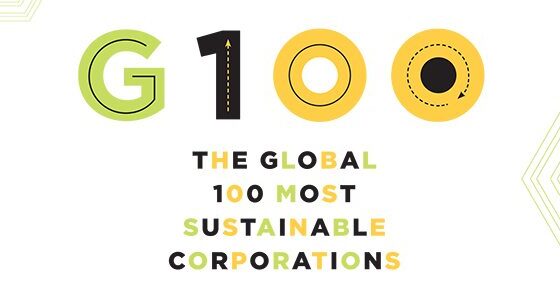 87% of Global 100 firms link executive pay to sustainability targets. (Davos, Switzerland, January 21, 2016) Corporate Knights, the Canadian-based media and research company, today released the 2016Global 100 Most Sustainable Corporations in the World (Global 100) ranking. The ranking is featured in the winter issue of Corporate Knights, the magazine for clean capitalism.

Companies that make the Global 100 ranking are the top overall sustainability performers in their respective industrial sectors, selected from a starting universe of 4,353 listed companies with a market capitalization greater than $2 billion (USD) on October 1, 2015.

“Global 100 companies demonstrate ambition and achievement on a broad spectrum of indicators. Striving to make the world a better place, they are where people want to work, firms we want to buy from and invest in for the long term,” said Toby Heaps, CEO of CorporateKnights.

One of this year’s encouraging findings is the link in executive pay for sustainability performance. In 2016, 87% of the Global 100 firms provided a monetary bonus to executives who achieved sustainability targets.

The top-ranked company in this year’s Global 100 index is Bayerische Motoren Werke AG, moving up from 6th place in 2015. Headquartered in Munich, Germany, BMW makes luxury cars and motorcycles, including the BMW i3 electric series.

BMW turned in top-quartile performance against peers for its efficient use of water, energy and lack of waste. The company also excelled against its peers with top quartile results for its responsible approach to paying taxes, large innovation investments, low employee turnover and low CEO-to-average-worker pay ratio.

U.S. firms earned 19 positions on this year’s Global 100 Index, France is home to 11 companies, there are 10 Scandinavian companies[LB1] , with Canada and United Kingdom each accounting for nine on the list.  The tiny island state of Singapore, known for its high natural resource productivity, placed four companies on this year’s list.

The Global 100 is determined using 12 quantitative sustainability indicators, including the amount of revenue companies generate perunit of energy consumed, the ratio of CEO to average worker pay and per cent of taxes paid. The Global 100 tied for the best overall ranking in the world for its relevance, insight, trustworthiness, and convincing methodology in a ranking by the Branding Institute.

TOP 10 OF GLOBAL 100 MOST SUSTAINABLE CORPORATIONS IN THE WORLD

City Developments Limited (CDL) has been ranked the Top Real Estate Company and Top 10 Corporations in the prestigious Global 100 Most Sustainable Corporations in the World in 2016. This makes CDL the first and only Singapore company to be listed on the ranking for seven consecutive years. Starting from 81st position in 2010, CDL’s ranking improved to 34th in 2015 and rose to 10th in 2016.

Recognised as the world’s preeminent sustainability equity index and gold standard in corporate sustainability analysis, the 2016 ranking was announced at the World Economic Forum in Davos, Switzerland, today.