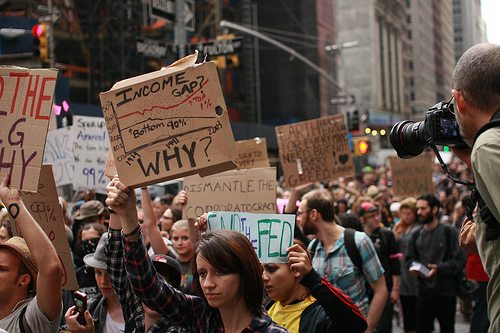 There is something in the air. Collaborative working spaces, social innovation, crowdsourcing and crowdfunding, impact investing, social impact bonds, venture-philanthropy, social enterprises, triple-bottom lines, social return on investment and social entrepreneurship are all on the rise.

Organisations like the Hub and the Centre for Social Innovation in Canada are flourishing with social entrepreneur memberships and incubating various start-ups or social enterprises; IndieGogo and Kickstarter are just two of the dozens of crowdfunding platforms now available; MaRsDD, the Rockefeller foundation, Deloitte, FinanceForGood and many others are all exploring the notion of social impact bonds, impact investing and other new innovative ways to fund initiatives for impact; funders like the Ontario Trillium Foundation are looking for non-profits to demonstrate a social return on investment and are encouraging them to act more like enterprises; and philanthropists are even being encouraged to act more like socially-minded investors.

These shifts in business are not occurring within silos; they are all a part of a larger movement – a movement that is gaining traction and may be referred to as Capitalism 2.0.

At the time of this writing there is no accepted definition of Capitalism 2.0, nor a Wikipedia article regarding it. However, the Toronto Sustainability Speaker Series (TSSS) held an event at the end of 2012 to convene thought leaders “to discuss how to create a better form of capitalism: Capitalism 2.0”.

As a result of this event, TSSS has committed to release their first volume of a Strategy Manual in early 2013 called Capitalism 2.0: Strategies for the 21st Century Enterprise.

The manual will provide strategic guidance on how organisations can thrive in a new economy – an economy that they are calling CAP2. I imagine this report will speak to many of the terms that were mentioned above. However, in the advent of a ‘new economy’, perhaps it is important to talk about more than just the usual suspects.

One term that ought to also be part of the CAP2 conversation is the growing income gap, as I am concerned it has the potential to undermine the development of this ‘new economy’.

It is the elephant in the room that no one in the social space wants to talk about. No one in this new exciting movement of doing good and making good, wants to think of the growing income gap as being a factor in this movement or even influencing it.

Capitalism 2.0 promises greater sentiments for social and environmental factors in the private sector, a world where business and governments work together to achieve common goals and an economy that fosters growth both locally and on a global scale. The growing income gap, however, is so harmful to our social democratic foundations and principles of justice that I fear any social, environmental or economic gains by Capitalism 2.0 will be overshadowed.

This growing income gap which is slowly obliterating middle-income earners represents the monopolistic forces of big corporations, the hoarding of money for private gain, the disconnect between people, their jobs and their country, and, perhaps worst of all, the societal acceptance that such an oligarchical system is inevitable and even good.

The top 1% of America has 40% of all the nation’s wealth, and the bottom 80% only has 7%. The average income of the richest 10% of the population is about nine times that of the poorest 10% across the Organisation for Economic Co-operation and Development (OECD).

In order to understand how the growing income gap is related to the development of CAP2, we need to explore why the shift to Capitalism 2.0 is occurring, if it is indeed occurring. Assuming this change is simply because our generation ‘cares more’ is naive; there are always multiple forces moving in complex systems, and if we are going to champion this movement, we have an obligation not only to promote it, but also to understand it.

To accomplish this task we need to ask the more difficult questions. For instance, is it possible that Capitalism 2.0 is gaining traction because of the lack of opportunities in our current state of capitalism? Do collaborative working spaces represent a defensive response to big corporations and the weakening of other social bonds? Are crowdfunding and impact investing a reaction to the lack of venture capitalists? Are social impact bonds, venture-philanthropy and the emphasis on social return on investment effects of modern funding constraints? Are social entrepreneurs and the focus on the triple-bottom-line regressive attempts to reinstate the loss of local markets in the face of globalization? More broadly speaking, is Capitalism 2.0 a proactive movement reflecting a fundamental shift in values and aspirations, or a form of survival-adaptation within a framework that itself is undergoing material change?

By answering these sorts of questions we will gain a better grasp of this new movement and what it is means for our future. For example, if we view this movement through the lens that not-for-profits are participating in social enterprises as innovative ways to produce sustainable products and services, then we can rely on this movement to guide the developments of such a shift in the economy.

But if not-for-profit social enterprises are completely the result of funding cutbacks, and not intrinsic values to produce a sustainable good, we need to understand what outcomes that may produce in the long-term.

It is conceivable that encouraging not-for-profits to endeavour in cost-recovery enterprises will build the disparaging case for more future cutbacks, as the expectation to participate in such ventures would be the new established norm. Or consider a social impact bond, which is a contract with a public sector commissioner in which it pays an investor for improved social outcomes.

If investors are using their money to introduce new capital into the social sector by taking on risks that governments are not willing to, then we can be more confident those investments will generate positive outcomes. However, if investors are approaching social impact bonds as just another opportunity to increase their net-worth with public dollars or pounds, such a financial instrument will likely lead to exploitation.

If CAP2 wants to establish itself as a new economy, the driving forces cannot be mere by-products of capitalism, but rather must be novel foundational pillars that lead to significant and real improvements.

In order to do this, champions of Capitalism 2.0 cannot ignore the lingering effects of the growing income gap or they are just going to perpetuate the current economic trend of placing more money in the hands of the few and distracting change makers from making an impact that would actually see better outcomes for more people.

Mitchell Kutney’s work focuses on reimagining the roles of philanthropy and social change to create sustainable solutions. He has spearheaded a number of successful non-profit initiatives in Canada and holds a master’s degree from Carleton University in Public Policy. This article originally appeared on his website.

Mitchell Kutney's work focuses on reimagining the roles of philanthropy and social change to create sustainable solutions. He has spearheaded a number of successful non-profit initiatives in Canada and holds a master's degree from Carleton University in Public Policy. Visit his website: www.mitchellkutney.com