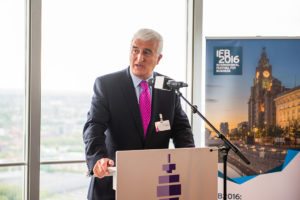 There are less than 30 days remaining before the start of the International Festival of Business 2016 (IFB2016). The countdown was announced at an exclusive roundtable event at BT Tower in London last week. Britain’s business leaders came together to mark the date.

The roundtable event featured an exhibition including and showcasing British businesses that epitomise the best of “Brand Britain”. They included:

– Balance Me: Family run start-up that has grown into a hugely successful premium, British-made natural skincare business over the last 10 years with results-focused formulas. The brand has won a legion of fans that include Oscar-winning actresses and British Olympians, amassing over 40 industry and media awards

– Brompton Bicycle: Run by IFB2016 ambassador Will Butler-Adams, Brompton designs, produces and globally distributes over 45,000 bikes each year from their UK factory. The company has grown from £2m turnover in 2002 to £33m and exports account for 80% of sales

– Candy Kittens: A gourmet sweets manufacturer founded by Made in Chelsea star Jamie Laing and Ed Williams. The business currently exports to more than 15 markets worldwide, including the US, Malta, Netherlands and Germany

– Cobra Beer: Founded by IFB2016 ambassador Lord Karan Bilimoria, Cobra Beer has grown into a global brand that exports to more than 40 countries and is produced in three locations worldwide

– Kymira: Established in 2013 in the renowned Science and Technology labs at the University of Reading, its combined team of Scientists and Sport’s enthusiasts has developed a range of performance and recovery enhancing sportswear that incorporates its unique, patented KYnergy infrared technology

– M Squared Lasers: One of the UK’s fastest-growing tech firms, the business produces innovative laser products that are used to do everything from treating cancer and developing regenerative medicines, to detecting chemical warfare agents and teleporting information. M Squared was awarded the Queen’s Award for Enterprise last month

Attendees were given an update on the plans for this world’s biggest business event by IFB2016 chair Max Steinberg, with the organisers spelling out what delegates can expect from the festival. Dr. Catherine Raines, CEO of UK Trade & Investment, set out the role IFB2016 will play in the government’s efforts to boost UK exports and encourage inward investment.

“As a showcase of all that’s great about British industry, IFB2016 will shed light on the industries that are fueling the UK in the 21st Century, the businesses that are driving these sectors, and the future stars of British enterprise across Energy and Environment, Creative and Digital and Manufacturing.

“These are businesses that are thriving across the country – firms with the ambition and creativity that embody the spirit of Brand Britain that resonates around the globe. It’s this spirit that will be on full display in Liverpool in just 30 days’ time for the start of the International Festival for Business 2016.”

“I am particularly excited by the UKTI programme, which will bring together UK companies of all sizes, experienced exporters and first timers with buyers and investors around world. From UK Food and drink businesses who want to build their e-commerce capabilities to global investors looking for oil and gas opportunities here in the UK – I am calling on all companies to attend by registering for the IFB2016 Business Club today.”

Backed by HM Government, IFB2016 will open on Monday 13 June and run for three weeks. It will bring together thousands of global businesses, providing a platform for companies to connect and conduct international commerce.