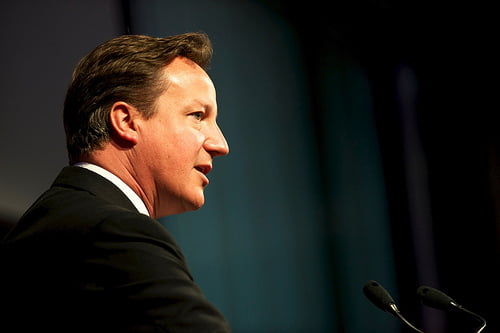 David Cameron’s planned keynote environmental speech on Thursday will be reduced to mere “remarks” on the subject, despite it being in the pipeline for weeks.

This means that the wait for his first green speech whilst in charge of Britain is extended, and his claims of leading the “greenest government ever” remain firmly in the past.

Instead of the planned speech, energy secretary Ed Davey will address some of the world’s most influential climate figures at the Clean Energy Ministerial, with the prime minister appearing briefly to answer a handful of questions at the beginning of the day.

Rumours about Cameron’s abandonment of the speech initially emerged last night on Twitter.

Despite exact details of proceedings being a little fuzzy, the very fact that there is confusion shows the apathetic nature of the government’s environmental commitments.

And for the renewable energy industry, this isn’t good news.

Despite being a sector that now supports 110,000 UK jobs, rising to 400,000 by 2020, and despite the fact that 85% of Britons are behind the use of clean power, a continued lack of strong commitment from the Government has left advocates, businesses and organisations alike well and truly in the lurch.

And as if the severe lack of environmental emphasis in George Osborne’s unsustainable budget statement wasn’t enough to put a downer on a sector that should form a cornerstone of our economy, this latest bout of governmental indecision further relays why we really aren’t witnessing a green movement from the top.

The fact is, the environmental and renewable energy sectors are becoming real players in the global economy—with the figures showing  that wind power alone contributed €32 billion to EU GDP in 2010, rising by a third since 2007— yet still, the UK Government are treating them like illegitimate children.

Blue & Green Tomorrow is of the view that a move towards a green or low-carbon economy should underlie every decision made by the Government.

A recent report by a coalition of MPs criticised the lack of strategy displayed by the Government. It said, “There remains a critical unfulfilled role at the centre of government in coordinating and reconciling priorities, to ensure that long-term and short-term goals are coherent across departments.”

Once again, the Government has done very little to show that the environment and a green economy are at the front of its agenda. Quite the opposite, in fact, given Osborne’s apparent love for the gas industry in his budget speech.

Curiously, according to the Financial Times, Cameron’s speech on Thursday might not be “cancelled” as such, because he was simply never planning to make one in the first place.

That was Downing Street’s apparent response to the claims that the PM had ducked out of addressing ministers— a strange retort given the fact that almost everyone in the environmental space was counting down the days to the speech.

However or whenever (if at all) the Government’s environmental stance is delivered, B&GT will be on hand to bring you the latest.

Our Twitter feed is the best place to go to keep up-to-date with all the latest goings-on.