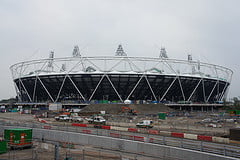 Labour MP Barry Gardiner is one of a number of people to have criticised Dow Chemical’s involvement in the London Olympics. It’s argued that a company with strong links to the 1984 Bhopal disaster should not be associated with the so-called “greenest ever Games”.

At an Adjournment Debate on the Sustainability of the London Olympics in February, Gardiner lashed out at Dow’s role as official sponsor of the Olympic Stadium.

Labour MP Barry Gardiner is one of a number of people to have criticised Dow Chemical’s involvement in the London Olympics. It’s argued that a company with strong links to the 1984 Bhopal disaster should not be associated with the so-called “greenest ever Games”.

At an Adjournment Debate on the Sustainability of the London Olympics in February, Gardiner lashed out at Dow’s role as official sponsor of the Olympic Stadium.

“Regarding the site itself, the ODA (Olympic Delivery Authority) has spent in excess of £1.8m cleaning up the toxic legacy of chemical contamination that blighted this area”, he said.

“The remediation of the site has brought this land back into public use and has been a wonderful focus to improve the environment and the quality of life for people in this part of London.

“What an irony then that this most sustainable of all Olympic Games should embrace as one of its key sponsors a company whose name is inextricably linked with the worst chemical disaster in human history.

“A company that owns the Union Carbide Corporation that was responsible for up to 25,000 deaths that have been directly associated with the Bhopal Gas Tragedy in India.

“This is a company that has to this day failed to remediate the site to the point where the water table is now so contaminated that children in Bhopal are born with deformities at ten times the rate elsewhere in India.”

Dow’s connection to London 2012 raises yet more questions over the event’s sponsorship selection policies, with oil giant BP’s role as sustainability partner already under the microscope.

The Bhopal disaster of 1984 is widely-regarded as one of the worst industrial catastrophes in human history.

“Large amounts of water entered a tank containing 43 tonnes of Methyl isocyanate (MIC) in Union Carbide’s plant in Bhopal, India”, wrote Ingrid Eckerman, in a background paragraph for her book, The Bhopal Saga: Causes and Consequences of the World’s Largest Industrial Disaster.

“A strong chemical reaction started and a big cloud of toxic gases spread over the sleeping town.

Speaking to Blue & Green Tomorrow, Eckerman added that this one catastrophic event of human tragedy should be ample evidence as to why Dow is an inappropriate company to be a sponsor at London 2012.

“The Olympic Games are supposed to show sport untouched by commercial interests”, she said.

“Doping is not allowed. It is supposed to inspire youth to engage in healthy sports and keep away from less suitable occupations.

“Therefore, the demands on the sponsors must be ethically and morally high. Companies engaged in drugs, pornography, weapons (of all kinds) or pollution, or violating human rights, should not be accepted as sponsors.

“Dow Chemicals is not a suitable sponsor.”

Lord Coe’s promise of the “greenest ever Games” is seemingly undone by opting for a deal with Dow. However, there are two sides to every story and Dow has argued that the Bhopal plant was bought long after the incident, responding strongly to the criticism pointed towards it.

“The people attacking Dow have woefully underestimated our character and who we are”, said its vice-president, George Hamilton, in The Guardian.

The prime minister has also lent his voice to the debate, with The Guardian running with a story titled ‘Dow Chemical deal is fine by me, says David Cameron’.

Despite the condemnation over Bhopal, Dow has drawn plaudits over its environmental policies in recent years. It won the 2006 ACC Responsible Care Energy Efficiency award, mainly because of a 22% energy intensity improvement from 1995 to 2005.

A year later, Dow Agrosciences, a subsidiary of Dow Chemical, won the United Nations’ Montreal Protocol Innovators Award – an award that recognises innovation, investment and commitment to protect the environment.

Then, most recently, in 2008, Dow Chemical won an Energy Star Award, for its continued involvement in energy management.

Dow then at least appears to be taking some steps in the right direction. However, this does not mean that it has successfully offset the pain, grief and damage caused by the incident at the Bhopal plant in 1984.

N. D. Jayaprakash, joint-secretary of the Delhi Science Forum, and co-convener of the Bhopal Gas Peedith Mahila Udyog Sanghathan – an organisation seeking justice for Bhopal victims, tables a compelling argument against Dow’s involvement with the Games for Frontline and Counterpunch. Both are essential reading on the matter.

What is very clear is that large-scale corporations must continually strive to become more ethical and sustainable. One of the biggest ways to drive this change is through sustainable investment.

To get involved, ask your IFA or fill in our online form and we’ll connect you with a specialist ethical adviser who will help you invest your money with companies working towards a more sustainable and ethical future.