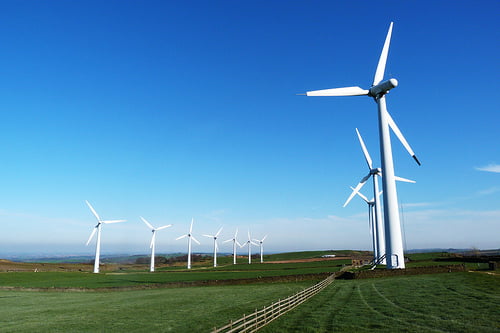 The wind industry increased its contribution to EU GDP by a third between 2007 and 2010, according to a report by the European Wind Energy Association (EWEA).

By 2010, the wind industry was contributing €32 billion to the EU economy—a figure that is expected to have climbed even higher in the time since.

The report, called Green Growth, also states how the industry’s growth in that year was twice that of the EU’s GDP overall—further proof that businesses and energy providers are quickly realising the potential of wind power.

“It is countering the recession – providing increasing economic activity, more jobs and exports every year to an EU struggling with an economic crisis intensified by ever increasing amounts of fuel being imported at rising costs to European citizens,”

CleanTechnica republished a neat infographic from the EWEA report that shows the impact of wind energy on jobs and the economy.

“This report highlights the role that wind is playing in helping to restart the European economy, and the jobs and investment the industry can generate, even in difficult times.”

Last month, Ed Gill of Good Energy – the UK’s only 100% renewable electricity supplier – wrote how onshore wind development is an opportunity the UK can’t afford to miss, in a piece for B&GT.

“The simple fact is that we need to invest more in our energy infrastructure in the UK because we haven’t done for so long”, he wrote.

“In renewables, we have the chance to ensure that the money we spend on our energy stays here in the UK, rather than disappearing abroad to the world’s oil and gas exporting nations.”

The UK wind industry’s image has suffered significant setbacks in recent months, with a number of high-profile individuals publicly attacking the sector.

US tycoon Donald Trump and National Trust chairman Sir Simon Jenkins have both voiced their dislike for the energy form.

More recently, Tim Rice, who has previously said he is “incensed” about wind turbines, told the BBC’s Andrew Marr, “I’ve been offered a fair amount of cash to put a wind farm up in Scotland, and it’s insanity that [with] these machines that don’t actually do their job very well, rich idiots like me should benefit from it and put everybody’s bills up.

“It’s a crime actually, and I’m delighted if the wind is changing.”

But Matthias Fripp of the University of Oxford’s Environmental Change Institute debunked some key myths surrounding wind energy. In particular, noting that the often used argument of inefficiency is not logical.

Our recent in-depth report, The Rise of Renewable Energy, highlights the need for investment in not only the wind sector, but all forms of potential renewable energy.

If you are a clean power convert but don’t know where to begin, Good Energy are on hand to help you switch your home to renewable energy.