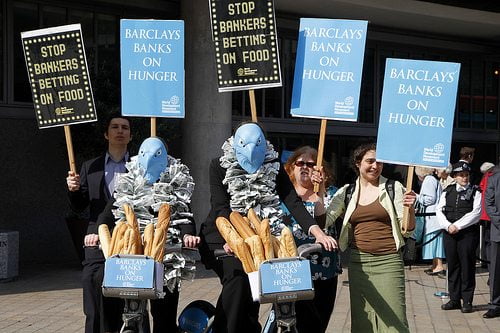 EU negotiators have agreed to introduce regulations to stop bank and hedge fund speculation driving up global food prices, which some claim fuels the global hunger crisis. The UK, however, has blocked the tightening of the regulations.

The new rules will limit the number of food contracts that banks and other financial institutions can hold and will also force traders to open up their transactions to greater public scrutiny.

Although the agreement between EU negotiators has been welcomed by some campaign groups, others said that the UK Treasury’s “watering down” of these regulations was a “disgrace”.

According to the World Development Movement (WDM), Goldman Sachs, Barclays, Deutsche Bank, JP Morgan and Morgan Stanley together made an estimated £2.2 billion from speculating on food including wheat, maize and soy between 2010 and 2012.

The WDM also said that this speculation increased price volatility, and is one of the causes of the price spikes of recent years.

Nick Dearden, director of the WDM, said, “Public outrage over food speculation has been huge and the fact that the EU has listened to that anger is a victory for public pressure. But the UK’s role in watering down the regulation has been a disgrace.

“The Treasury has put the profits of banks like Goldman Sachs above the basic human need for food, with the result that the new rules could be too weak to be effective.”

He added, “[The] agreement is a good step forward, but now we need to make sure the limits are set at a level that properly tackles excessive speculation.”

Barclays was recognised for food speculation by the Public Eye Awards in 2012 – an event that names and shames companies over their “social and ecological offences”. The British bank announced its intention to end its involvement in the practice a month later, with chief executive Antony Jenkins claiming it was “not compatible with [its] purpose”.