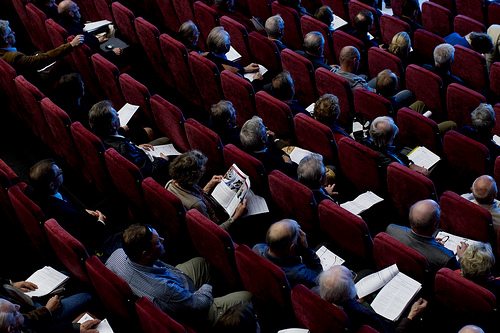 The Royal Bank of Scotland (RBS), WPP, Hiscox, BG Group, Lloyds Banking Group, ITV, Standard Chartered, Reckitt Benckiser and Ocado. You might think there isn’t much that connects these nine large, diverse businesses. But in the 2014 round of annual general meetings (AGMs), each has been asked tough questions by shareholders on the issue of executive pay.

A third of Reckitt Benckiser’s shareholders voted against its executive remuneration report in May. Insurance firm Hiscox suffered an even bigger revolt, with 42% of investors voting down its remuneration policy. Meanwhile, RBS and WPP were the latest two corporates to face the wrath of dissatisfied shareholders at their AGMs last month.

It is no wonder – given how hot the topic is for the investor community – that Responsible 100 chose to host a roundtable session to discuss exactly this at the end of June. A utility for open, honest and accountable businesses, Responsible 100 provides companies a platform on which to publish answers to a range of social and environmental questions. Businesses are scored based on their answers, and all their information is then subject to public scrutiny, comment and rating on www.responsible100.com.

The event – held at consultancy firm KPMG’s London office – was run under the Chatham House rule, so as to allow participants to speak more freely. It included investors representing over £750 billion of managed assets between them, a leading pay consultant, an international trade union body, founders of leading shareholder advisory consultancies and senior directors from the UK’s leading civil society organisations focused on tackling high pay and inequality issues. The aim was to discuss whether the question Responsible 100 was currently asking businesses was fit for purpose.

Since then, some businesses have responded in exemplary fashion – listening to shareholders and having a reasonable ratio between the highest and lowest paid employees in their organisation. Others, though, have refused to listen. Executive pay is “a window” into the way a company is managed, it was said.

Participants agreed that the debate needs to change. FTSE 100 directors are often blamed for Britain’s wealth inequality – but what about the footballers who get paid far more?

Another participant said that executive pay should be looked at in relation to what’s going on in the rest of the company. They said that directors needed to suffer in the same way that shareholders do when a company’s share price falls – and vice versa.

One area up for debate was determining what an acceptable highest to lowest pay ratio looks like. The Responsible 100 question suggests 20:1 is the benchmark. However, many in the room agreed that overreliance on a single number was problematic, especially in that it varies widely from sector to sector for perfectly legitimate reasons.

Further, given the average pay ratio in the FTSE100 is 133:1, and that John Lewis, which is employee-owned and often held up as a poster child for responsible business, has a 75:1 ratio, the 20:1 benchmark began to look seriously outdated.

One participant said that some companies lowered their pay ratios by outsourcing the lowest-paid work. John Lewis had recently faced calls to pay all staff the living wage, and it responded by saying most of its cleaning staff were contractors – and therefore not subject to the living wage commitment that it employs across most of the business.

It was said by someone else at the meeting that in actual fact, most companies simply don’t know their pay ratios. They’re not being evil and purposely not publishing it – it’s just very difficult and time consuming to work out. They added that we should strive to get as much information out into the public domain for analysis.

Performance-related pay was also a topic of discussion. A participant pointed towards behaviourist theory – if you do X and get Y, then Y reinforces X – saying that most incentive schemes work in that fashion.

They noted a study by Harvard economist Roland Fryer, who looked at how students in low-performing schools responded to financial incentives. He found that it doesn’t work because the children don’t know how to get the grade – but if you can pay them to go to school, they pick up the knowledge almost by accident. This, the participant said, was a useful lesson in how business approaches the junction between performance and pay.

Speaking after the event, Michael Solomon, director of Responsible 100, described the discussion as “excellent and enlightening”.

He added, “Again we have found, as with previous meetings looking at issues ranging from involvement in the defence sector to transparency on tax, that despite the infinite nuances and complexities which exist, it is quite possible for businesses that want to tell the truth about what they are doing inside their organisation to do so.

“Even on issues as sensitive executive pay, how it is set, and how it compares to those at the opposite end of the company pay scale.”

Vincent Neate, head of climate change and sustainability at the event’s host KPMG, said, “For as long as I have been in business, the mantra has been that business is private and transparency an imposition.  There is a growing demand from society, whether your value proposition is B2B or B2C, that business leaders need to turn this on its head.”

Meanwhile Graham Precey, head of corporate responsibility and ethics at Legal & General, one of the founders of this new form of transparent business practice, added, “The Responsible 100 is the only place where heads of policy within companies and campaigning NGOs sit down and discuss standards of responsible business out of the heat of campaigning. It is also the only place where the answers to the questions are then published direct to consumers to vote on the integrity of the answers.”

The Responsible 100 question on executive pay, its rationale and answering guidelines that support it, and the answers which various businesses have provided to it, can be viewed here.

It is likely that, further to the meeting and after subsequent and ongoing discussions, that the reference to the 20:1 ratio will be dropped and a new question – “Is [your company] transparent on executive pay?” – introduced, alongside answering guidelines which will specify the minimum amount of detail answers must contain.

It’s clear that executive pay is an issue that investors and businesses should be taking seriously. A small but growing minority are, if the Responsible 100 meeting is anything to go by, but there is clearly a long way to go. The more information that is available to help all parties formulate rational responses can only be a good thing.

Performance vs pay: should boardroom officials be rewarded regardless of their company’s success?