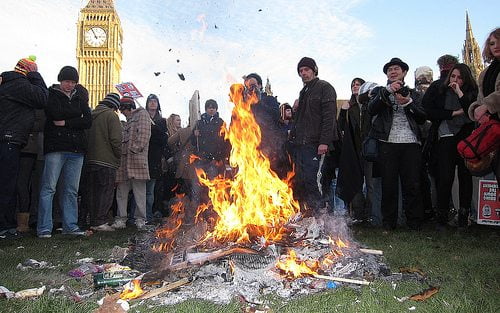 We begin our youth as left-wing idealists with little focus on self-enrichment. As we age, however, we become progressively right-wing – with a focus on individual goals. Today, people in generation Y are on the political right of where their parents and grandparents were as youngsters, representing a change in social ideals.

On the BBC Radio 4 programme Generation Right, broadcast on Monday evening, interviews with economists, political editors and marketing experts are combined with the thoughts of a small group of young sceptical people.

Where this scepticism is directed highlights the worrying trend in this generational shift. This is the most likely generation to have the least favourable view of the welfare state – where benefit claimants are the greatest drain on state resources and personal achievement is the highest priority.

This is not to suggest that, as a generation, those under 30 years of age are automatically right-wing; it is the shift in political views in comparison to the last generation and the one before them that is under observation.

On average, generation Y is now politically right-wing, but socially liberal. Race, sexuality and gender roles are no longer defining social priorities; individual choice and freedom is generally encouraged as we live in a more individualised society. Along with this freedom comes a greater sense of individual responsibility – which is reflected negatively on communal institutions like the NHS, and more generally, the welfare state.

The redistribution of wealth to the poorer echelons of society is no longer a priority of a once proudly welfare based nation. Talking to BBC Radio 4, Bobby Duffy, head of public affairs at market research specialists Ipsos-Mori, described the different context in which generation Y has grown up in.

“In terms of technology and culture, it’s a very different context generation y has grown up in”, he said.

“With an individualised outlook, the big theme of generation Y is a sense of personal responsibility, which seems more in tune with some conservative opinions.”

He added, “That connection to the welfare state is much weaker, with a highly negative view on benefits. It is again connected to that sense of personal responsibility and because that generation has not had an awful lot of help, if you think of student loans, paying for tuition fees and the nature of the housing market, etc.”

Emphasis is also placed on school league tables and exams, which contributes towards a sense of competitiveness between peers. That’s according to the Economist’s political editor Jeremy Cliffe. This “[strengthens] that sense of individualistic drive”, he said.

The highly critical view that has been taken against benefits claimants in particular is a worryingly disproportionate one. TV shows like Channel 4’s Benefits Street influence negative opinions towards the socially disadvantaged – creating a sense of “we pay, they gain”.

This attitude was also taken towards the NHS from sixth-formers interviewed by the BBC. Those who are reliant on the health system because of self-induced damage should be forced to pay a fee – in particular heavy drinkers or obese people.

On the Radio 4 programme, Labour activist and blogger Emma Brunel placed a lack of political activism as the root cause to why young people feel so isolated and bitter towards the state. She said, “Young people have been hit hard. People are being squeezed at the very beginning of their lives, and it is cynical, but young people don’t vote.”

The idea of personal choice outweighing genuine need is an interesting observation. Generation Y is in fact the first generation to grow up with the internet and an enforced idea of social networking.

Ironically, the fundamental ideals of the internet, based on a ‘hive mind’ or large community-based interaction, have been undermined by individualistic tendencies – with selective, peer-to-peer networking.

Social media in particular has provided a platform for online personalities to be built, with groups or networks supporting that very image you choose to present. Although we are technically connected via a world wide web, we are in fact only choosing to engage with a tiny proportion of it.

Curating individuality, some argue, is actually a triumph of capitalism – where the greatest change in society is actually in consumer tendencies. Fraser Nelson from the Spectator said, “Greater individualism is bred from greater choice. Even down to what television you watch has changed. We now have people who do not even watch television, but watch Netflix or box sets – you no longer get conversations about EastEnders.”

How we choose to spend our free time increasingly defines who we are, which is a factor behind this change in social attitudes. We also live in a culture where we are defined by what we have.

Young people’s views today support socially progressive ideals, but are isolated by mainstream politics because the social pressure on generation Y to achieve individually undermines collective thought. If they felt more inclined to actively engage in political discussions, then abuses of power like the rising of tuition fees would have at the least sparked greater debate – with generation Y being taken far more seriously than it currently is.

Engaging our apathetic youth with politics will create a fairer democracy