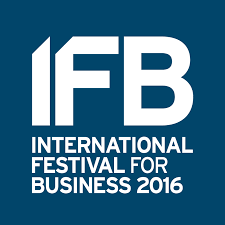 This year’s three week International Festival for Business (IFB2016) opened yesterday at Liverpool’s Exhibition Centre. IFB2016 is the premier event of the business calendar and will showcase the best of British innovation, design and creativity to an international audience. More than 30,000 delegates are expected to attend this year’s IFB2016.

The largest global showcase of great British industries and sectors in a generation, IFB2016 will provide a platform for business leaders, established giants of British industry, entrepreneurs of high-growth businesses and unsung heroes of SMEs. The second bi-annual festival brings together more than 90 international businesses with the aim of forging the links that deliver strong commercial outcomes for the British economy.

IFB2016 has three themed weeks, which focus on industries within advanced manufacturing, energy and environment, and creative and digital. The themes are being brought to life by more than 80 events that will discuss, debate and highlight the expertise that the UK possess in the industries that will shape the future.

Sitting at the centre of the festival at Exhibition Centre Liverpool and acting as a backdrop to the wide variety of events and activities is the GREAT British Showcase – an experiential selection of the best in British design, innovation and creativity.

Running throughout the Festival will be the IFB2016 Blue Skies programme, a selection of thought provoking sessions that will be free for all to enjoy. These will intersperse daily events with a highlight being the early evening talks with business leaders, statesmen, entrepreneurs and thinkers to end each day on a high.

Speakers throughout the three weeks include:

IFB2016 is the biggest business event of its kind in the world and a core part of government efforts to boost exports and increase inward investment. It is a major platform for UK innovation and follows the inaugural Festival in 2014, which generated £280 million of investment deals and export sales.

Max Steinberg CBE, Chair of IFB2016 commented: “IFB2016 will be the biggest festival of its type in the world. It builds on the exceptional success of the inaugural festival in 2014 and promises to be even more exciting. Packed into three weeks we have an exceptional array of eighty events, thought provoking talks on the Blue Skies stage and a GREAT British Showcase that highlights the best UK innovation, design and creativity. Starting today the festival will be a place where ideas are shared, connections made and deals done.”

IFB2016 is expected to attract more than 30,000 delegates from the UK and overseas, it will be a thriving marketplace for companies to create connections and do deals.

In addition to the events IFB2016 offers through the free membership of the IFB2016 Business Club:

Delivered by Liverpool Vision in partnership with UK Trade & Investment and the GREAT Britain Campaign, IFB2016 will feature, in addition to the GREAT British Showcase, the Exporting is GREAT Export Hub, and a changing, interactive display of UK industry sectors and inward-investment opportunities.

IFB2016 will showcase the UK as the go-to place to do business and will build on the success of IFB2014, which attracted companies from 92 countries and facilitated export and investment deals worth over £280 million.

The festival will take place at Exhibition Centre Liverpool, a state-of-the-art event complex on the city’s iconic waterfront. There will be a rich and varied cultural programme for delegates to enjoy while in Liverpool – a former European Capital of Culture.

Attending the festival is free, but to get involved with the many and varied facets of the festival delegates must register for the online IFB2016 Business Club.

Membership of the IFB2016 Business Club will give delegates and visitors access to free advice from specialists in legal, accounting, translation, regulation and exporting. In addition, there is a digital matching service that will arrange meetings from delegations looking to do deals. Finally, all the details of the attendees at events that a visitor registers for thorough the IFB2016 Business Club will be available.