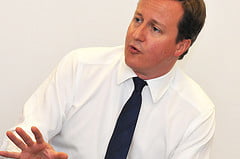 Prime minister David Cameron has defended wind farms, despite recent opposition from over 100 MPs, who publicly disputed government policies in the sector.

A coalition of backbenchers wrote an open letter that labelled the technology as “inefficient and intermittent”, and suggested that subsidies should be “dramatically cut”.

Prime minister David Cameron has defended wind farms, despite recent opposition from over 100 MPs, who publicly disputed government policies in the sector.

A coalition of backbenchers wrote an open letter that labelled the technology as “inefficient and intermittent”, and suggested that subsidies should be “dramatically cut”.

Standing firm alongside the Government’s position, Cameron claimed that there are “perfectly hard-headed reasons” for installing more onshore wind farms.

“A portfolio of different supplies enhances energy security and prevents the UK from becoming over-reliant on gas imports.”

Cameron’s response will provide those in the renewable energy industry with encouragement and reassurance about the governmental stance over the need for clean power. It is widely regarded that an increased reliance on such technologies is imperative, if the UK is going to play a significant role in tackling climate change and realising a green, low-carbon economy.

The announcement comes a week after figures were released showing that there are now over one million people employed in renewable energy across the EU. The prime minister added, “I am also determined that we seize the economic opportunities in renewable energy supply chains as the global race for capital in low-carbon sectors intensifies.”

Chris Heaton-Harris, the Conservative MP who fronted the open letter, offered a reaction to the PM’s words in the Guardian.

“I obviously didn’t expect the prime minister to just say, ‘OK, you are right’, and change policy in this area and I am pleased he understands the massive concern that local residents have about these plans“, he said.

“However, those who signed the letter would like to see a cut in subsidy to on-shore wind greater than the 10% proposed, and hope that our suggested amendments to the national planning policy framework are taken on board.

“We are also concerned at how the cost of this type of renewable energy is adding to fuel poverty.”

His words are likely to be food for thought for Heaton-Harris et al.

“Wind ranks very well on cost, fairly well on timing (matching the winter peak demand in the UK) and very well on environmental impacts other than its effect on the view”, Fripp said.

“The real environmental benefit of renewable power comes when it allows us to avoid running existing plants and, in this respect, wind actually performs quite well; I have found that even when accounting for the emissions from running backup capacity during a sudden wind drop, wind can still reduce CO2 emissions by 90-95% compared with getting our power from natural gas plants alone.”

It’s refreshing to see the Government maintaining its pro-wind stance, because it clearly is an integral part of the UK’s energy future.

One way for individuals to support this view is my making the switch to renewable energy through Good Energy. To affect the future in a more long-term scale, consider investing your money into sustainable funds that support the fast-growing renewable energy sector. To do this, ask your IFA or fill in our form, and we’ll help you to make a difference.