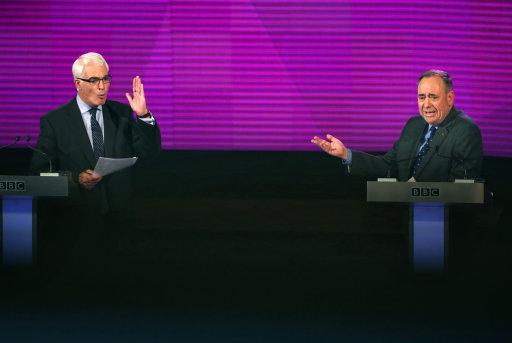 In the second round of the televised debate between Alistair Darling, leader of the pro-union Better Together campaign, and Alex Salmond, first minister of Scotland and leader of the ‘say no’ campaign, polls suggest Salmond took the initiative in a debate focused on Scotland’s future currency and disputed oil revenues.

Twenty days after the first televised debate, where Darling was considered victor, the ex-chancellor looked particularly uncomfortable as the first minister stated the legality of Scotland’s right to use sterling, regardless of what the Bank of England or Westminster said.

Darling believed Salmond was asking Scotland “to trust what he says – and I can’t.”

He added, “The point about a currency union is that both parties have to agree to it. You are taking a huge risk if you just assume it’s all going to fall into place.”

This was refuted by the first minister’s claim that the only thing to be lost in the lack of a currency union was the assets of the Bank of England. This, argued Salmond, was impossible anyway – as it would mean Scotland not having to pay debts accumulated under the previous labour government, when Darling was chancellor.

An ICM-Guardian poll taken instantly after the debate suggests Salmond had won the debate with a 71% majority, compared to 29% for Darling.

The discussion over oil led to cheers from the audience as Salmond stated that “any country in the world would be delighted at the oil asset we have”. Darling believes the stated revenues of Scotland’s supposed oil reserves were in fact vastly over exaggerated and would not provide the financial stability an independent Scotland was seeking.

Darling was also accused by one audience member of forgetting his Labour roots which was jumped on by Salmond, suggesting Darling was “defending Tory policies” that had resulted in high levels of unemployment, food banks and public spending cuts.