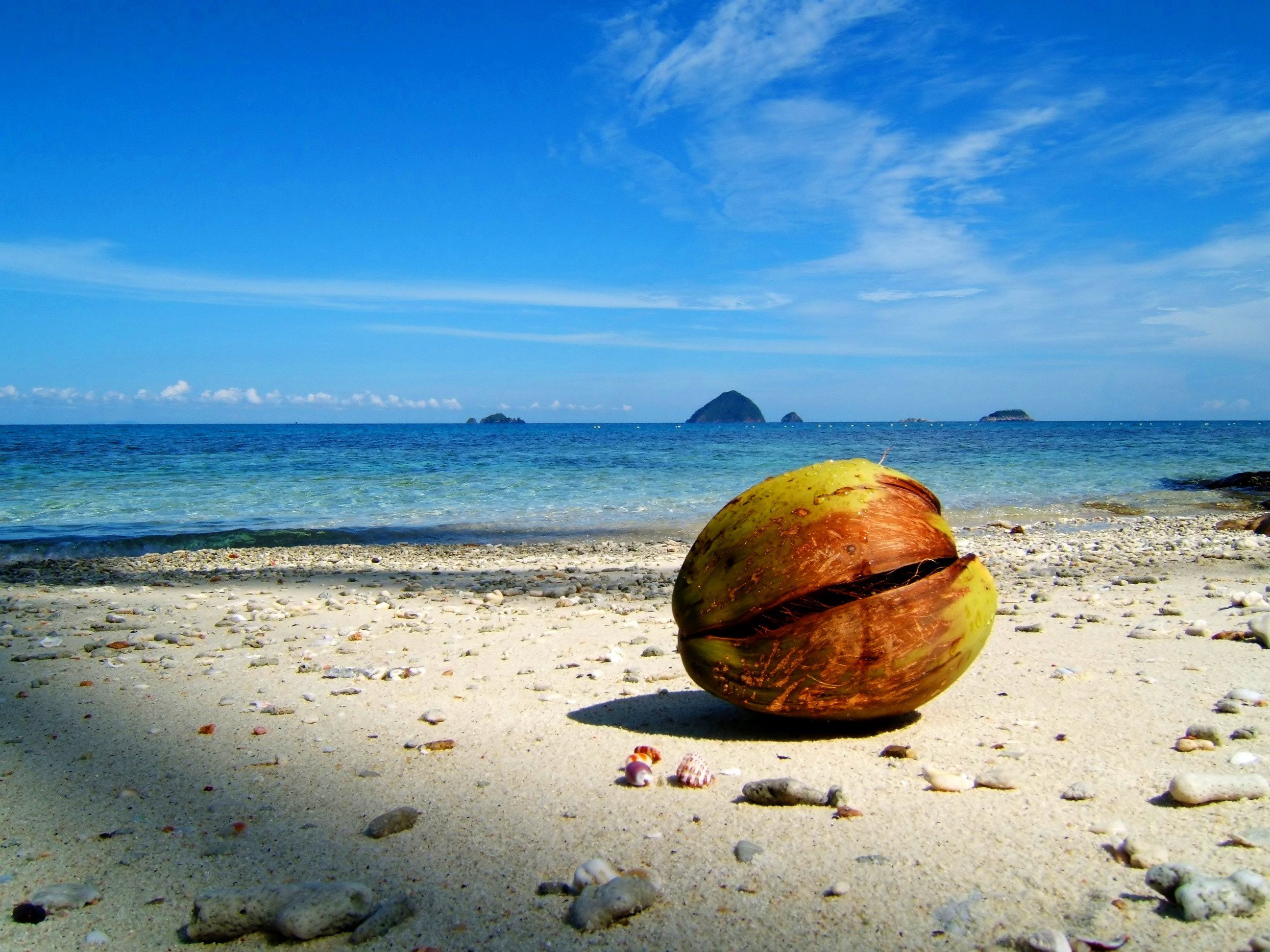 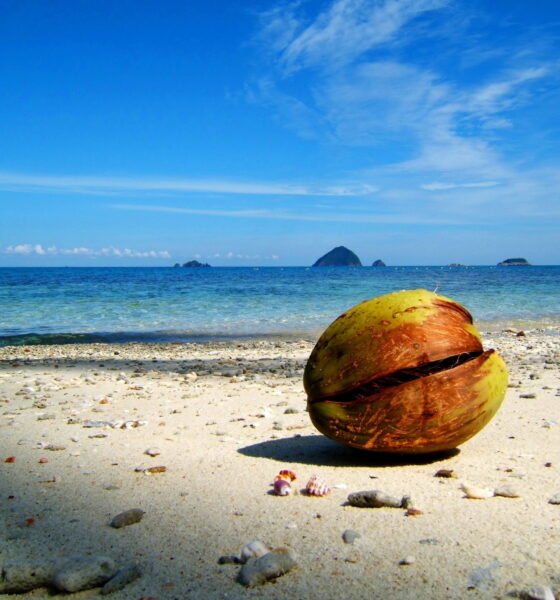 Come closer, I want to tell you a story. It is about a group of people who lived somewhere in the middle of an ocean, on a wonderful island. Paradise! Life was very good.

The island had a warm but moderate climate and naturally provided enough food for everyone with the minimum of cultivation. There was also very good fishing around the coast.

Each day involved a certain amount of work in the fields or in the boats, but nothing excessive, and everyone made sure that the routine was regularly interrupted for siestas and fiestas. There was plenty of time to relax, and the population made a point of enjoying the sunshine and family life.

Anyone observing the islanders from afar would have considered them as a group of holidaymakers and not farmers or workers.

Although the weather was usually balmy, there were a few storms during the rainy season, and it was after one particularly violent overnight squall, that early one morning, two fishermen came across a strange object on the beach. It had been driven ashore by the exceptional tide and strong winds.

The fishermen had never seen anything like it before.

They approached it cautiously at first, full of curiosity, but at the same time somewhat fearful. Prodding and poking with their fishing sticks provoked no reaction. The men became braver and made a closer inspection.

As they got closer, the detail of the object became apparent. It was a box; blue-black in colour and decorated with strange dials, handles and knobs. The short sides of the box were each punctured by oblong slits, squid-inky black, which seemed like silent lures into the menacing shadows within.

When the openings were tested with sticks, there was some resistance, and a low purring or humming sound would rise from deep inside the box, followed by a whirring and clanking vibration. It was all very strange.

After much discussion, the council of elders decided to leave well alone. The box was moved nearer the village, away from the water’s edge and gradually forgotten. It bothered no one and no one bothered it.

The story how the power of the box was later rediscovered has been repeated many times. With additions and omissions and poetic embellishments, the tale became a myth and thus, like a maturing wine, through time and anticipation, transformed into a legend.

The basic fact is, that one day, during an early morning harvest, a coconut got pushed through one of the slits in the box. It is immaterial whether this happened accidently or was the result of some capricious experimentation fuelled by listlessness. The young lady responsible, whose name was Anesidora, later, as we shall read, became (justifiably) famous.

Her action had a profound impact on the lives of the islanders and explanations and analyses of her discovery can now be found in all respected history, business and psychology texts and journals. Although no longer with us, she is still celebrated variously, in different communities, as the mother of mass production, the sister of shopping or the champion of consumption.

The power in the box first manifested itself with a simple operation. The coconut pushed in one end of the box, came out of the other side in two.

It was Anesidora who was the first to realise that this had profound implications for all their livelihoods. No more chopping coconuts in half. All that hard manual work would be taken away. There would be more time for siestas and fiestas. The box was a godsend!

At first the process itself was a wonder. Crowds gathered to listen to the whirring and clanking as a whole coconut went in one end and then watched amazed as a split shell popped out of the other. However, over time, interest in the wonder of the mechanism waned. People no longer bothered watching the splitting of the nuts. In fact, it was quite boring!

Some islanders even began complaining about the noise, especially when the box was operated early in the morning, or late at night. And this was occurring more and more often because the demand for split coconuts not only spread amongst the families on the island but also to the inhabitants of neighbouring archipelagos, who began to visit with various craft goods and other types of produce to exchange for the ready-split, takeaway nuts.

Anesidora decided early on that the work of harvesting the coconuts and feeding them into the box was not for her alone. She recruited several of the villagers to help collect the coconuts and feed them into the ‘input’ slot of the box. In order to keep up with the expanding demand, these workers were organised into shifts, and Anesidora had to arrange for payment in terms of meals for these people, because they no longer had free time to tend crops and feed themselves. Luckily, the workforce seemed pleased to accept takeaway coconut in exchange for their labour.

Anesidora’s organisation grew and prospered. Production and exchanges increased month by month; year by year. However, there were hiccups along the way. The biggest problem was maintaining efficiency. The labourers seemed not to want to work at full capacity throughout their shifts.  Production was slowed by lack of concentration, chatting and unauthorised toilet breaks. They complained that the job of collecting coconuts and simply feeding them into the box was boring, simplistic and repetitive.

It was all very mechanistic.

In response, Anesidora introduced a payment system based upon agreed targets in order to increase motivation. She also decided to select her workers more scientifically, and the best of these had their talent managed and developed through coaching, mentoring and ‘leadership’ workshops.

However, having gone a long way to solving the problems of production, Kernel Sidoras Inc (as the organisation was now called), found that sales were no longer increasing. The reasons for this slowdown were hazy. The customers were unclear when asked why they were buying less Ready-Split (as the product was now called). A majority of those surveyed mentioned lack of value or of just being bored with the product.

Once again, Anesidora was able to respond to this crisis of no growth. She consulted the local shaman. This enchantress knew of magical spells that could entrap and enthral all those that came under their charm. She called the witchcraft Branding, a subconscious deception created through the use of the hermetic art of advertising.

The initial illusionary image used in the ad campaign created by the Sham-Agency for Ready-Split became a future icon. It was the first example of experiential advertising.

The advertising did its job. Sale exchanges increased, production was increased, and Kernel Sidoras grew.

However, alerted by the prophetic warnings of the shaman (sometimes known as scenario planning), Anesidora did not rest. She undertook a series of experiments with the dials and knobs on her box, in an attempt to produce something other than Ready-Split from the output slit. After all, her ever- growing consumer base said they were desperate for something new.

After months of abortive trials and frustrations, Anesidora finally learned some of the secrets of the box. Although her knowledge was only partial, it was sufficient for her to coax entirely new products from the output slit.

But through trial and error, Anesidora gradually became more skilled in operating the mysterious controls until she felt that she was mistress of the box.

Thus, in conjunction with the Sham-Agency, Kernel Sidoras Inc launched a plethora of new products.

The majority taking their place in the pantheon of famous brands, because of the artistry and creativity encapsulated in their packaging and design.

The organisation enjoyed a period of unprecedented growth. More and more coconuts had to be sourced, harvested and shipped to the input slot. The box was worked 24/7.

It seemed that all available limits had been reached. The employees were working flat out. The markets were saturated. Consumers had enough things.

It was again that Anesidora showed her extraordinary powers of intuition and astuteness. She took herself off to the oracle at Saatchi and consulted the pysycho-shamam, Bernays. He told her of a wonderful and yet awesome knowledge that had been passed down to him from his uncle Fraudo. This knowledge had largely been ignored because it brought the message that all humans were irrational beings, driven by dark forces of greed, pride and lust. It was a truth that no one wanted to hear.

Bernays explained to Anesidora how this esoteric knowledge could be applied to branding. Products could be animated; they could take on a life of their own; things themselves could become personalities!

And people would readily blend their own selves with these thing-personalities. Their own identity would become indistinguishable from the brand identity. The emergent self was some ghostly hybrid performing a role written by Fraudo’s id.

This whole concept appealed to the mischievous Anesidora and within a few months of returning from Saatchi’s Oracle, a completely new range of coconut products were on the market. Each was carefully branded to appeal to the consumers’ brand self-identities, using Idvertising, (a new marketing technique developed (and copyrighted) by Anesidora herself).

There was a huge boost in sales. The workforce just could not cope with the new production rates that the new orders demanded. The organisation had to modernise and introduce automation in order to become more efficient.

This new machinery needed power, so some of the local coconut groves had to give way to generation plant.

And as the box was worked harder and harder, it wanted more power. Anesidora could sense the insatiable need in the box somehow reflecting her own desires.

From her new yacht, she wondered where it might all end.

“…but the woman took off the great lid of the jar […] and caused sorrow and mischief to men. Only Hope remained” – Hesiod, The Homeric Hymns, and Homerica by Homer and Hesiod

Nigel Marlow is director of InnovationBubble and a consultant in the higher education sector. He is a member of the British Psychological Society and licentiate of the Forum for Business and Consumer Psychology. He presents at academic and business conferences and publishes articles in marketing, consumer and research journals.

Behind The Story of Stuff – Part I

Behind The Story of Stuff – Part II