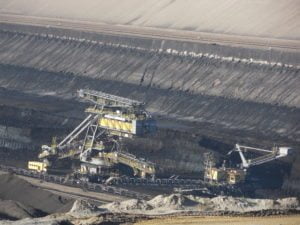 Activists across Europe have come together to close an opencast coal mine in Germany. More than 2000 activists who are protesting about coal mining have entered Welzow-Süd in the Lusatia coal fields, shutting it down. Many are blocking coal trains and conveyor belts transporting coal to power plants.

Hannah Eichberger of the anti-coal network Ende Gelände (“here and no further”), said: “Every new tonne of coal that is dug up is one too many. We are hitting the emergency brakes today.

“We won’t leave climate action to governments and corporations any longer. We are taking matters into our own hands now.”

To keep global warming below 2 degrees, at least 80 per cent of global fossil fuel reserves need to stay in the ground. Yet, the federal state governments of Brandenburg, Saxony and North Rhine-Westphalia plan to continue lignite mining until mid-century.