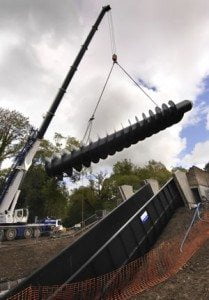 At the beginning of the month, Big Society Capital announced it was to invest £14.5 million of ordinary shares into Charity Bank. The announcement represented the social lender’s largest ever single investment and will be used by Charity Bank to expand and achieve its long-term goals.

Charity Bank uses savings deposited by individuals to lend to enterprises and organisations that have a social purpose. There is a growing demand for finance from the charity and social enterprise sector and the organisation estimates that two-thirds of the projects funded in 2012 would not have happened with its support.

The Whalley Community Hydro scheme has already raised half of the money required for the project through a share offer. Work on the project is planned to start later this spring and it is hoped it will produce 345,000 kilowatt hours (kWh) of renewable energy each year.

“We are more than satisfied that the Whalley Community Hydro scheme will not only generate significant amounts of clean energy but will be the catalyst for other sustainable projects in the area. The positive social impacts of the scheme will be significant.”

Charity Bank’s £400,000 loan to Whalley Community Hydro is added to a similar amount that has already been raised in shares.

Shares in the project cost £1 with a minimum investment of £250. It aims to pay a return of between 3-5% to investors who may also qualify for the government’s Enterprise Investment Scheme (EIS) tax relief.

Charity Bank has also noted that the value of loans it has approved had increased significantly in 2014. In the first three months, 20 loans worth £7.8m were made, more than double the value of loans made over the same period in 2013.

Patrick Crawford, chief executive of Charity Bank, said, “As the demand for loans from us increases, so our need for more deposits will increase significantly, and we are seeking savers who not only want a financial return on their savings but also a positive social one.”