In the transportation industry, it’s more than just ethical to move toward sustainable energy options — it is economical. With the price of fuel a constant question mark ― and an expensive question mark, at that ― most trucking companies are eager to find green alternatives that are more stable in price and availability. Fortunately, technological innovation continues to shape the transportation industry, and soon companies will have a varied selection of clean, green commercial trucks.

While they may not look any different on the outside, commercial vehicles are beginning to transform into green machines. In fact, within a few years, many big rigs might have the exact same sustainable technologies as most new passenger vehicles, and some might be even more futuristic.

The concept of a fuel-free electric vehicle has entranced manufacturers and drivers for ages ― more than a century, in fact ― and finally, electric cars are on the road. However, the same technology is still being developed for medium- and heavy-duty trucks. The problem today is one of range; even the highest-end electric vehicles drive only 100 miles on a charge, compared to the nearly 2,000 miles today’s semis can travel between fill stations.

Yet, experts believe that policies encouraging companies to buy electric fleets ― like New York state’s $60,000 vouchers for Class 3 to 8 electric vehicles ― will drive more innovation. Indeed, a few companies have promising projects in the works. Volvo, for one, is planning a substantial electrification roll-out in 2019, which drivers of all vehicles can look forward to.

Additionally, hydrogen fuel cells are major possibilities for the trucks of tomorrow. Because it does not produce greenhouse gases when consumed, hydrogen could reduce the transportation industry’s emissions to zero. Already, companies are applying this technology to big rigs with excellent results. Several fuel cell systems are currently available in hybrid commercial trucks, but 100 percent–hydrogen engines could provide even better fuel economy in the future. The first hydrogen fueling stations are expected in the Northeast in early 2017, and hydrogen-based fleets shouldn’t be far behind.

Future technology is exciting, but for most trucking companies, the most thrilling opportunities to build a sustainable fleet already exist. Already, commercial trucks are some of the most efficient vehicles on the road when considering weight and distance traveled. Estimates suggest that the average passenger vehicle would need to achieve 160 miles per gallon to match the efficiency of the average diesel big rig.

As gas prices rise, alternative fuels are looking increasingly promising to many trucking companies looking to reduce emissions and be more economical. While most proposed fuel alternatives remain promising ideas (even if they are outlandish, like algae-based fuel), some fuels, like biodiesel, are in use today. Biodiesel, which is created from animal and vegetable oils, produces 75 percent less emissions than petroleum. Trucking companies can take advantage of biodiesel without investing in new trucks, and several hundred biodiesel stations exist around the United States.

Moreover, hybrid engines that rely on both traditional diesel and an alternative energy source, usually electricity or hydrogen, are widely available and inarguably superior to their gas-guzzling forebears. For example, Volvo’s hybrid truck holds the industry record for the standing kilometer, reaching more than 95 miles per hour. Volvo’s VNL series has become especially desirable to transportation companies looking to build their fleet with fuel efficient trucks. Plus, most hybrids boast at least 7 miles per gallon ― 2 miles per gallon better than the diesel average ― which means this tech saves companies money fast. 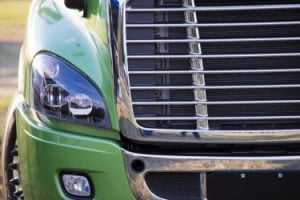 Yet, enhanced technology isn’t the only way trucking companies can decrease carbon emissions and boast a cleaner, greener fleet. Driver behavior has a significant influence on the efficiency of truck engines, so mandating certain conduct behind the wheel is one way to cut fuel consumption ― and increase safety.

For example, turning back speed governors by five miles per hour, from 70 to 65, can save several tens of thousands of tons of carbon emissions and improve mileage by up to 5 percent. An additional 5 to 10 percent bump to fuel economy can come from progressive shifting and avoiding hard stops and fast starts. While technology might provide even greater rewards, every driver has the power to make his or her truck cleaner and greener.