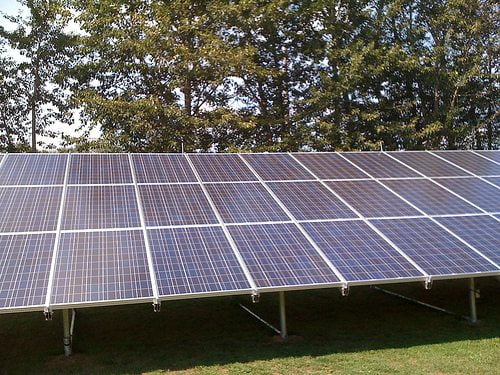 David Cameron Speaks out About Community Solar Farm in his Constituency

A community solar farm proposed in David Cameron’s constituency, which has already attracted almost £350,000 in investment from local people, has been recognised by the Prime Minster for its popularity.

In a statement, David Cameron said: “I am very proud of my Government’s green record – and especially the fact that 98 per cent of the UK’s solar panels have been installed since I became Prime Minister.

“The Southill Solar project is a great example of people’s enthusiasm for this technology.  As costs come down even further, I look forward to solar competing against other technologies and continuing to be an important part of the UK energy mix.”

The community group needs to raise a minimum of £2 million to build the solar farm, which was granted planning consent in July 2015. It has been pre-accredited for the Feed-in Tariff and will be one of the last community solar schemes to be guaranteed the subsidy since government support was slashed at the start of the year, but is on a tight deadline: construction must be completed by 31st August 2016.

Tim Crisp, Director, Southill Community Energy, said: “We’re delighted the Prime Minister recognises how popular community solar farms are with the public, both here in Oxfordshire and in the rest of the country. This sends a strong signal to potential investors that community solar is worth supporting and has a long-term future in the UK – and will serve as a useful reminder to the Prime Minister of what communities can achieve right here on his doorstep!

“We have been lucky with the timing of Southill Solar, which qualified for the higher rate Feed-in Tariff before the recent round of government cuts – and will be the last such investment opportunity for some time.”

The share offer aims to generate an average annual return for SCE members of 5% over the 25-year lifetime of the solar farm. The minimum investment is £250 and the maximum is £100,000. As well as offering investors a return well above current bank interest rates, SCE will also return around £750,000 over the solar farm’s lifetime to the local community to support schemes tackling fuel poverty, improving energy efficiency and reducing carbon emissions. This will include transforming the Charlbury Community Centre, another project supported by David Cameron, into an exemplar for energy efficiency.

The share offer is open to 8th April. Investment is open to anyone over 16, however if it is oversubscribed, investors living close to the solar farm will get priority.

The solar farm will have an installed capacity of 4.5MW, generating enough electricity for around 1100 typical homes – equivalent to most of the houses in the three closest settlements of Charlbury, Finstock and Fawler. It will also be used to promote biodiversity with a bespoke ecological plan including planting fruit trees and wildflower meadows nearby.

Investing is quick and easy via the online positive investment and savings platform, www.ethex.org.uk/SCE. Alternatively investors can complete an application form in the share offer document which can be downloaded from the website www.southillcommunityenergy.co.uk .