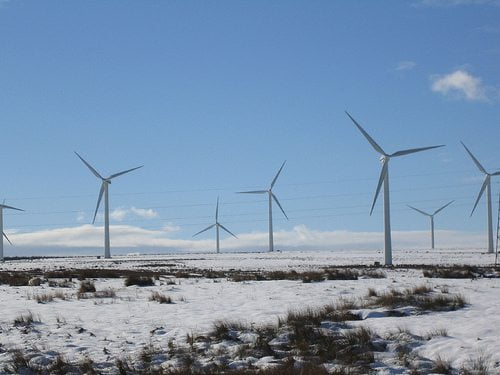 Defining the Future of Renewable Energy in Scotland: Half Of All Energy By 2030

Scotland should set an ambitious new target of generating the equivalent of 50% of its total electricity, heat and transport demand from renewables by 2030, according to industry body Scottish Renewables. Meeting the new goal would require a threefold increase in green energy generation, with new figures showing Scotland on track to be more than halfway there by the end of this decade.

Scottish Renewables is calling for the new target as part of its manifesto, Renewed Ambitions: Defining the Future of Renewable Energy in Scotland, launched today ahead of May’s Scottish Parliament election.

The document sets out how the organisation believes Scotland’s next Government can best support the continued growth of the sector and the economic and environment benefits it is already delivering.

Niall Stuart, Chief Executive of Scottish Renewables, said: “Scotland’s ambitious climate change and 2020 renewable energy targets have signalled a clear intent for the country to lead the way in the transition to a low-carbon economy.

“Together, renewables now produce the equivalent of 15% of Scotland’s energy use across electricity, heat and transport.

“But with only four years to go, it is now time to look beyond 2020 and for Scotland to set a stretching target for renewables to produce the equivalent of at least 50% of all energy use across electricity, heat, and transport by 2030.

“That may seem ambitious but we will be more than halfway there by the end of this decade, and Sweden – the European leader – already sources half of all energy from renewables today.

“Achieving this new target will require strategic leadership from the next Scottish Government. The development of a comprehensive and joined-up energy strategy will allow the sector to maintain its competitiveness as well as spearheading the development and deployment of new technologies.

“Not only will these measures support growth in the next chapter of our industry, they will ensure that renewables can play a key role in meeting Scotland’s climate change targets, and maximise the jobs and investment that our sector can bring to Scotland.”

The Scottish Renewables manifesto also calls on the next Scottish Government to:

– Accelerate the growth of sustainable transport by allowing the use of bus lanes, providing free parking, and expanding the provision of charging and re-fuelling points for low-carbon vehicles

Responding to the manifesto, WWF Scotland director Lang Banks said: “We should build on the great progress Scotland has made in harnessing its massive renewable resources to generate electricity, by doing the same in the key areas of heat and transport. Alongside steps to reduce our overall energy use, we agree that now is precisely the time for Scotland to be setting out bold new targets for all our renewable energy.

“The rapid progress Scotland has made on renewable electricity has mainly been down to a strong target, industry support, and strong leadership across successive  Scottish Governments. As we approach the Holyrood elections, we call upon all the political parties to set out how they’ll grasp the economic and social benefits that will come from embracing the transition to a fully renewable future.”

Anne Schiffer, energy campaigner at Friends of the Earth Scotland, said: “This call from Scottish Renewables is welcome as we need a holistic approach to the renewable energy transition in Scotland that integrates electricity, heat and transport. We also need to make sure that communities don’t miss out. Therefore we are calling on the Scottish Government to increase the current 500MW target of community and locally owned energy by 2020 to 1GW and also set an ambitious target of 2GW by 2030.”

Schiffer continued: “In a difficult UK policy environment, it is vital that Scotland continues to lead the way to an energy future based on renewables that deliver for local economies.”

Mr Stuart added: “There are an increasing number of communities interested in building their own projects or taking a stake in commercial developments.  We are keen to build on that and ensure the benefits of renewable energy are shared as widely as possible.

“One way we could achieve this is through the creation of a Scottish Renewable Energy Bond which would allow savers across Scotland to invest in the growth of the renewables industry while also generating a return on their investment.”