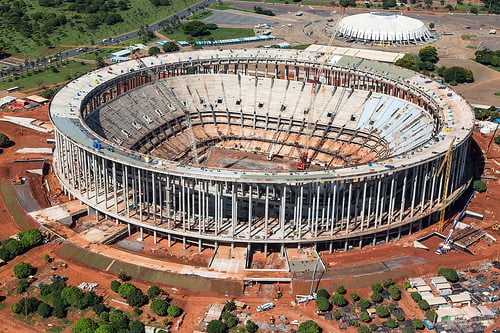 While most people’s eyes will be on the 22 players from Brazil and Croatia kicking off the 2014 World Cup on Thursday, Hyewon Kong looks at how one stadium is leading the way on sustainable design.

This year’s World Cup is special not just because the hosting country has won more World Cups than any other, but also because sustainability has been a critical point of contention in the build-up to the event.

This has been most evident in the protests that local people in Brazil have organised to highlight their concerns that the competition is having a negative impact on their communities. Clearly the world wants a new model that doesn’t involve riding roughshod over existing infrastructure and local community interests, but Brazil has nonetheless helped to push the sustainability agenda forward in other ways.

Nowhere is this more clearly demonstrated than in the world’s first net zero energy stadium, Estádio Nacional de Brasília (formerly known as Estádio Mané Garrincha) in Brasília, which is also the first sports arena in the world to receive the platinum level (maximum) LEED (Leadership in Energy and Environmental Design) certification from the US Green Building Council.

This remodeled stadium uses recycled materials from the old stadium and will generate 2.5 megawatt (MW) of solar energy – enough to power the entire stadium with the remainder going back into the grid. This is more solar power than 11 of the 32 countries participating in the competition are generating. It also actively reduces emissions through a pollution absorbing roof membrane, and collects rainwater to be reused in toilets and cleaning.

The world’s most sustainable stadium couldn’t exist without the computer-aided design (CAD) and simulation software, vital tools used by architects and engineers to transform their ideas into reality that are provided by companies such as Autodesk and Ansys. The key advantage of this technology is that it can calculate, measure and test different materials and components beyond human capability from the earliest design phase and work out how all the individual components can be put together accurately in the real world.

Projects at this scale involve huge amounts of financial, natural, and human resources and so avoiding errors and sharing accurate information is crucial for successful execution. The computer programmes help reduce waste, improve resource efficiency and significantly reduce the overall environmental and financial cost of the project.

According to EcoArenas, the Brasília stadium is expected to realise energy savings of up to 120% per year and will reduce potable water consumption by more than 80% compared with previous designs. The technology not only underpins the environmental performance of the building but also ensures safety by investigating physical strength using various simulations, as shown by the image below.

This kind of computer programme is used not only in large-scale projects, but it also touches many aspects of our daily lives from our homes, schools and transport to food and drinks (mainly packaging or logistics). Increasing raw material prices and volatility, as well as more stringent environmental and safety regulation, are driving the adoption of these tools, in turn enabling greater innovation and improving resource efficiency.

A critical driver has also been the escalating costs of non-compliance with a variety of environmental and safety requirements. The costs of ‘getting things wrong’ has never been so high, and the ability to test and simulate performance in a range of different conditions throughout the design process, has made CAD and simulation technologies essential.

The listed equity investment team at WHEB has recently reviewed a set of computer aid design and simulation technology businesses. The sector as a whole offers great investment opportunities driven by the megatrends addressed above. It also has high entry barriers as users of the technology tend not to switch easily to other vendors, due to the long time and knowledge embedded in the users’ own workflow. As a result, the industry has high recurring revenues and generates good margins and cash flows.

Currently, the FP WHEB Sustainability fund is invested in Trimble Navigation, a provider of products and services that are used to efficiently to plan, design and implement a range of commercial and agricultural processes and construction projects. We are also actively following other companies in the sector with a view to starting a position in due course.

Hyewon Kong is a senior analyst at London-based asset manager WHEB. This article originally appeared on its blog.