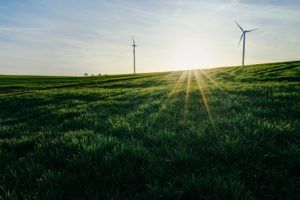 Ecotricity Lights Up The Sunday Times 250

It’s the first time Ecotricity has been listed in the report, which has been running for 12 years and features iconic brand names such as Arsenal FC, Barbour, Dr Martens, Nando’s, Skyscanner and Wagamama.

The company is renowned for its excellent customer service, and has received the lowest number of complaints in the industry for the last six years, and there’s been a significant increase in staff numbers over recent years to maintain those high standards, with staff numbers up from less than 200 in 2011 to around 800 today.

The achievement shows the rapid progression of Ecotricity, its founder Dale Vince and the renewables industry in Britain over the past twenty years, as clean energy has gone from a pipe dream to a reality, which makes business and environmental sense.

Dale Vince, Ecotricity founder, said: “For me, being in this list reflects the coming of age of our work. In twenty years green energy has come a long way from its roots – the preserve of academics, hippies and dreamers. Green energy is the number one choice and firmly the direction of travel for the whole world now – as it needs to be.”

After leaving school, Dale became a new age traveller and lived “off grid”, generating his own power through a small windmill. It was this sustainable lifestyle that inspired Dale to launch Ecotricity, the first green electricity company in the world, in 1996, marking the beginning of the now global green electricity market.

Dale’s mission was and remains to change the way energy is made and used in Britain, and the company now supplies 100% renewable electricity and green gas to households and businesses across the country.

But that mission has expanded over recent years, and now includes the three causes of 80% of all personal carbon footprints – Energy, Transport and Food. As well as building wind and solar parks, Ecotricity has installed the world’s first national electric car network, which now has almost 300 ‘electricity pumps’ capable of charging a car in just half an hour.

The group is also planning a 100 acre sports and green technology centre, dubbed Eco Park, next to the M5. Eco Park could create more than 4,000 jobs, as well as house a new stadium for Forest Green Rovers FC, the world’s greenest football club, which Dale Vince is chairman of.