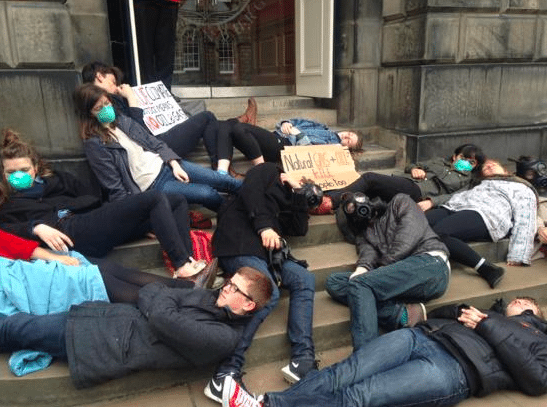 Student campaigners at Edinburgh University have accused staff of being ‘in the pockets of the fossil fuel industry’ after the University Court refused to divest from fossil fuels, despite recommendations to pull the plug on investments in coal and tar sands.

The university court, the highest decision making body in the university, was criticised on Tuesday by students, who say that it has “ignored calls from students, staff and alumni to divest from fossil fuel companies”. Students also accused the university of having a “conflict of interests”.

Senior Vice Principal, Professor Charlie Jeffery said, “The decision outlines our commitment to use the leverage of our investments to bring about change that reduces carbon emissions in the fossil fuels and other sectors, and to press further with our world-leading research activities that actively contribute to the solution of problems arising from fossil fuel emissions and the identification of alternative technologies”.

But students have reacted angrily, directing accusations toward the university that it has has put money before climate science. Wearing dust masks, they protested by lying on the ground outside the university.

The university has the third largest university endowment in the UK totalling £291m, after Oxford and Cambridge. £9m of this is currently invested in companies such as Total, Shell and BHP Billiton.

The decision has sparked outrage and a strong backlash from student campaigners and activists. A recommendation was made by the university’s Central Management Group to divest from fossil fuels, but members of the court refused on Monday to implement the changes.

Kirsty Haigh, student campaigner with Edinburgh People & Planet, said, “Despite the university’s public consultation showing overwhelming support for fossil fuel divestment, the university has put money before climate science. Heads of the School of Engineering, in the pockets of the fossil fuel industry, have been scaremongering throughout the process”.

She added, “Departments funded by the industry were over-represented on the investment advisory committee, whilst some schools had no representation whatsoever. Climate change is the most urgent threat the world is facing, and today’s announcement tells us the university is not taking it seriously enough.”

A open letter has been signed by 65 students within the School of Engineering and sent to Prof. Hugh McCann, head of the school, who has publically opposed the divestment campaign. It accuses the school of “failing to prepare its students for careers in the rapidly changing energy markets of the 21st century”.

Freedom of Information requests have revealed that the school received funding from a range of fossil fuel companies, including BP, Shell and ConocoPhillips, and that 37 members of staff were in direct contact with fossil fuel industry representatives.