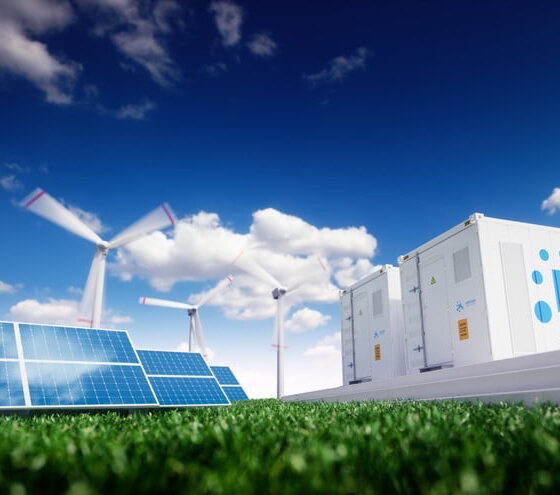 How Energy Storage Options Are Changing The Electricity Industry

The way we power our world is changing more quickly than most people expected. Thanks to a confluence of earth-conscious technologies and an explosion in public interest, the world is shifting to renewable energies at a rapid clip.

This is only half of the equation though. Even with the widespread adoption of solar and wind power, without a reliable way to store the energy we produce when we don’t have immediate need for it, we’re still left relying on fuels like coal and oil to get by.

Thankfully, energy storage is another branch of technology that’s coming of age quickly. In fact, with the arrival of more useful energy storage devices, homeowners and business leaders alike are taking advantage of considerable upheavals in the electricity industry.

Here’s what’s going on and what it’s going to mean for life both on and off the grid.

How Does Energy Storage Work?

Between 2013 and 2017, the United States added enough new storage capacity to power about 16 million laptop batteries for a couple of hours. That’s a sign of progress, but it’s a drop in the bucket when you consider it’s just .2 percent of the energy needed to power the whole country.

Energy storage is the technology that’s going to help us bridge this gap. Currently, the energy generated at our electric plants travels to its destination and then gets consumed practically instantly. What this has meant is that electricity providers, without a way to temporarily store that power, must continuously achieve a balance between supply and demand.

Energy storage devices can be thought of like “warehouses” for the electricity industry. The advantages over current technologies are enormous:

Life as a consumer of electricity will never be the same after these technologies come of age and begin to enjoy wider adoption.

One of the limiting factors when it comes to applying energy storage to home and business solar installations has been, to be blunt, the lack of profitability. nic climate change are obvious. Currently, wind and solar generation account for six percent and two percent, respectively, of the total U.S. electricity market.

Simply put, there hasn’t been a compelling profit motive until very recently for major players in the industry to invest in next-generation batteries.

One of the first household names in home energy storage was, of course, Elon Musk’s Tesla. Announced in February 2018, the Tesla Powerwall will soon be available at Home Depot stores along with the company’s Residential Solar Rooftop, putting both technologies within reach of the average and affluent homeowner.

At this early stage, competition is limited but heating up gradually. Beyond the Powerwall, homeowners can also choose from storage batteries from LG, Sonnen, Pika and others. LG is a South Korean company, Sonnen hails from Germany and Pika was founded in 2010 by engineers from MIT.

In this way, the growth of the solar energy and battery markets mirror the rapid globalization of world commerce in general. But more to the point, it’s connecting two hugely important dots — solar power generation and solar energy storage — and helping fix a problem even Nikola Tesla himself could only dream of solving.

Being able to temporarily store clean energy instead of being forced to use it immediately will cause monumental changes in energy production and consumption. The impacts for homeowners include being able to power their homes throughout the night and on cloudy days — depending on how much storage they have — instead of remaining dependent on the grid for parts of each day and each night.

Another advantage is the relatively more worry-free operation. Compared with something like an oil storage tank, next-generation power equipment is safer and more efficient for the average homeowner.

And word is getting out. In just five years’ time, the price for lithium-ion-based home electricity storage batteries fell by 40 percent. This is great news for current and hopeful homeowners.

And it’s great news for electric car owners too. The United States saw best-ever sales numbers for electric vehicles in 2017, representing a 25 percent increase over the previous year. But even this breakthrough technology has been hamstrung by limited availability of viable home energy storage options — and the even more limited capacity of the choices on the market. That’s quickly changing.

It’s becoming more realistic than ever for homeowners to go “off the grid” thanks to the availability and affordability of green power generation equipment and storage options.

The Market Has (Not) Spoken

One big question on Americans’ minds is: “What’s the holdup?” The urgency for more widely available solar installations and energy storage solutions is apparent.

Elsewhere in the world, the benefits of forward-thinking government investment are being made clear. In China, for instance, public investment in clean energies vastly outstrips even private American investment — twice over, according to some estimates.

China’s Poverty Alleviation Program incentivizes, and broadens the market for, small-scale solar installations and provides basic needs for underprivileged citizens, all at the same time. A similar, but stalled, program in America would have these favorable effects and more, including spreading awareness of the practicality and increasing the cost-effectiveness of renewable energies to lower- and middle-income Americans.

It’s true that the market has been slow to respond in America, but things are changing, and the advantages of combining energy storage with green energy are becoming more difficult to ignore.

In the meantime, the variety of political and social pressures — plus the rise in frequency of extreme weather events like the one that knocked Puerto Rico’s entire electric grid out of commission — means the scientific community is redoubling its efforts to improve the lithium-ion battery.

As more and more companies like Tesla and LG bring their solutions to market, we’ll see a variety of other materials emerge as industrial-scale alternatives to lithium. Sodium-sulfur, metal-air and lead-acid batteries all have scalable potential.

Under the right leadership in D.C., we’ll also see our institutions like the Department of Energy collaborate in new ways with green energy pioneers and broaden the availability of investment credits and research grants, as the scientific community is calling for.

In other words, with all the world’s eyes watching it and urging it along, green energy and energy storage together could become a surprisingly democratizing influence in the world.