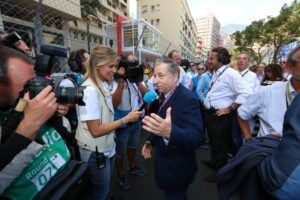 Formula E Presenter and science communicator, Nicki Shields, will be the Master of Ceremonies for this year’s LowCVP and Cenex-LCV2016 on 14 September.

The Champions Awards celebrate innovation and best practice in the UK’s accelerating drive to cut carbon emissions from the road transport sector. Now in their sixth year, the Awards will be presented at the Cenex LCV2016 Networking and Awards Dinner at the DoubleTree by Hilton Hotel, Milton Keynes.

Nicki has been the host presenter and pit-lane reporter for ITVs FIA Formula E Championship – the all electric racing championship that has been taking place on city street circuits around the world – since 2014.

Nicki is the anchor for CNN series ‘Supercharged’, a technology and motor show, and also CNN’s ‘Going Green’ eco show.

She also regularly presents at motor sports events, including ITV’s ‘Goodwood Festival of Speed’ show with Craig Doyle, ‘Cars of the Future’ with Robert Llewellyn and ‘Goodwood Members Meeting’. Nicki has also worked on ‘BBC Children in Need CarFest’ with Chris Evans, Motors TV Race Day, and Silverstone Classic for ITV4. She has been the host of the Autosport International Show and Automechanika.

Nicki’s presenting career started when she hosted the BBC’s popular “Escape to the Country” in 2014. She also writes for The Times, Evening Standard and CNN.com

The Low Carbon Champions Awards celebrate outstanding and innovative practice in the UK in accelerating the shift to lower carbon vehicles and fuels and reducing road transport emissions.

“The LowCVP Low Carbon Champions Awards are one of a select few sustainable development awards schemes to have received accreditation by the Royal Society of the Arts (RSA), which enables category winners to go forward to the European Business Awards for the Environment (EBAE).

The networking dinner at which the Awards are presented takes place on the evening of Wednesday 14 September 2016 – the first of two days of Cenex’s Low Carbon Vehicle (LCV) 2016 event.