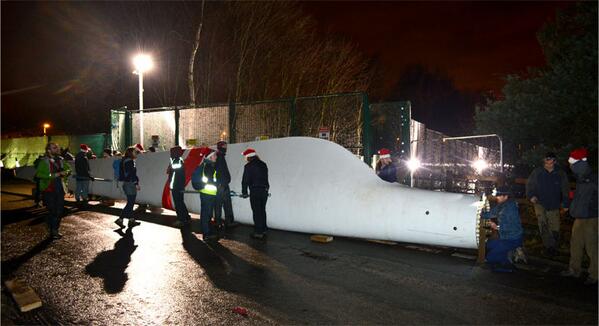 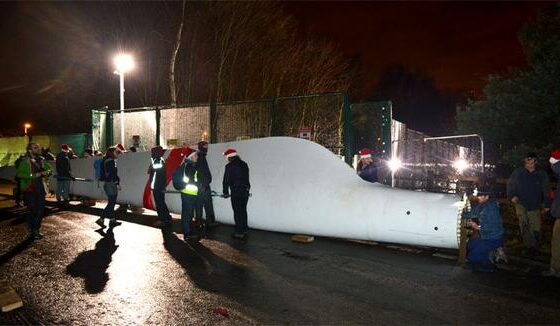 Anti-fracking campaigners have delivered a giant wind turbine blade as a ‘Christmas gift’ to shale gas firm IGas, blocking the entrance to its drilling site in Barton Moss, Salford.

Activist group No Dash for Gas says 50 people gathered outside the exploratory drilling site at 5:30am on Monday to assemble the 17 metre, 1.5 tonne blade, leaving the present complete with a large red Christmas bow. Police were called to the site, but arrived too late.

Sandra Denton, one of 50, said, “We’ve delivered this early Christmas gift to IGas to remind them that we don’t need damaging, risky and polluting energy sources like oil and gas to power the UK.”

IGas holds a permit to drill a test well 10,000ft deep at the Manchester site, to evaluate whether the site would be appropriate for shale gas extraction. If the tests prove successful, the firm would then likely use the controversial extraction method of hydraulic fracturing, or fracking, to obtain the fossil fuel.

An IGas spokesperson said, “We recognise the right to peaceful protest, however our priority is to ensure that there is minimal disruption to local people in the communities where we operate.

“We do not condone any protest activity which impacts the right of local people to go about their daily lives and work. We continue to operate in accordance with all the necessary regulation and permitting.”

Scientists and campaigners have raised many concerns over the possible consequences of fracking. The process has been linked to water contamination, methane leakage and increased risk of earthquakes.

Despite these fears, the industry appears to have the full support of the UK government. The chancellor George Osborne’s autumn statement confirmed the introduction of sizable tax breaks for fracking companies.

The government hopes that welcoming fracking to the UK could keep gas prices down and lower energy bills while broadening the national energy mix. However, in September the leading economist Lord Stern warned that such hopes were born of “baseless economics”.

From July to October, anti-fracking campaigners held determined protests outside an exploratory drilling site in the West Sussex village of Balcombe.

Over 100 people were arrested at the site over the two months, including Brighton Pavilion MP and former Green party leader Caroline Lucas. The protestors withdrew only after energy company Cuadrilla announced it would be vacating the site, after it was deemed unsuitable for fracking.