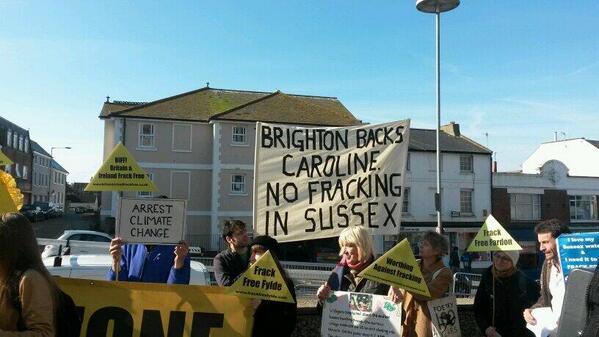 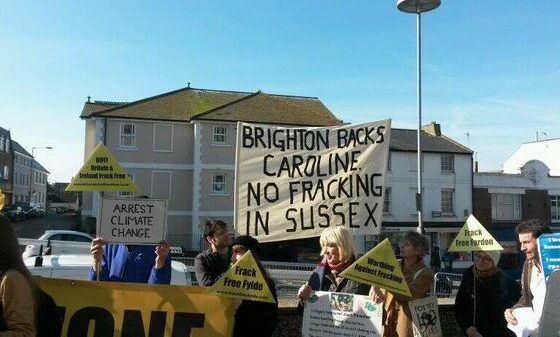 Green party MP Caroline Lucas appeared in court on Monday charged with blocking a highway and breaching the public order act, after her arrest at an anti-fracking protest last year.

The former party leader and current MP for Brighton Pavilion was arrested in August outside an exploratory drilling site in Balcombe, Sussex.

She was among 30 people held by police for blocking the main road in Balcombe during a series of protests against fracking firm Cuadrilla.

The trial at Brighton magistrates’ court was shown footage yesterday of the moment Lucas was arrested.

She was sitting while linking arms with fellow protestors when a man sat next to her was arrested.

An officer was then heard asking Lucas if there was anything he could do that would make her move but she refused and was arrested, according to the BBC.

Opening the case, prosecutor Jonathan Edwards said that after her arrest, Lucas “wanted to send a clear message to the government that fracking was not needed nor wanted”.

He added, “She did not believe that she was blocking anyone trying to get access to the site because she understood there was no drilling taking place that day and she was not on the road.”

Lucas said that she did not move because she wanted to show solidarity with the other protesters, the trial also heard.

Along with the four other defendants who appeared in court on Monday, Lucas denies the charge of wilful obstruction of the highway.

The court was told that the five would say they acted out of “necessity“, and would also say that they were acting reasonably and proportionately, referring to articles 10 and 11 of the European convention on human rights.

One of the defendants, Sheila Menon, also read a statement on behalf of all five. She said that they stood against fracking in the UK because “the stakes could not be higher“.

“The latest science suggests that as much as 80% of known fossil fuel reserves must stay in the ground if we are to have any hope of avoiding dangerous climate change,” she added.

Activists, environmentalists, scientists and governments across the world have a number of concerns over the possible impacts of fracking.

The controversial process works by blasting rocks with water and chemicals, which then fracture the rocks and release the natural gas contained within them. It has been linked to water contamination, methane leakage and increased risk of earthquakes. Investors have also warned that shale gas may prove uneconomical as efforts to curb climate change are increased.

Despite this, the UK government has sought to kick off a fracking boom comparable to that in the US by offering sizable tax-breaks to the industry.

In January, it was revealed that French firm Total would become the first major oil company to invest in the UK’s shale gas industry in a move welcomed by the government.

However, campaigners have pledged to launch legal challenges to try and stop fracking from taking place anywhere in the UK.