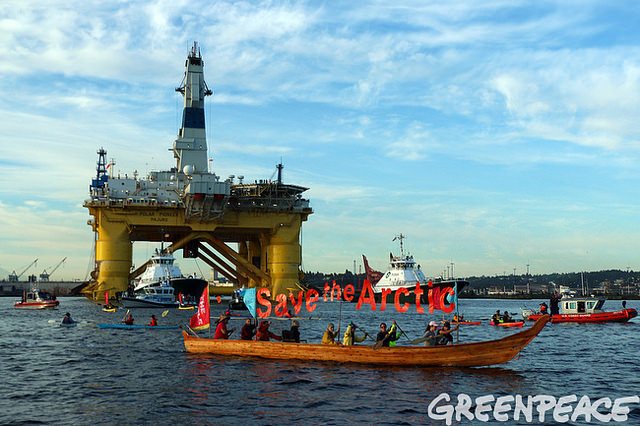 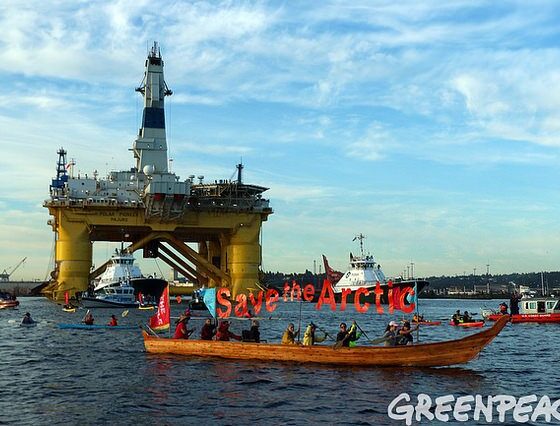 Greenpeace launches new action against Shell drilling in the Arctic

Thirteen activists on kayaks have blocked Shell’s drilling rig Polar Pioneer in Seattle as it prepared to leave for the Chukchi Sea in the Alaskan Arctic, where the company intends to drill for oil.

The action follows a similar demonstration held in May, when hundreds of people sat on kayaks, canoes and paddleboards in the waters around the Polar Pioneer to protest against Shell’s drilling plans in the fragile Arctic environment.

On Monday, as the Polar Pioneer prepared to leave Seattle to start drilling operations, Greenpeace activists blocked the rig and unfurled a banner against Shell.

Annie Leonard, the executive director of Greenpeace US, said, “Shell wants to haul its 40,000-tonne Arctic destroyer to Alaska as soon as possible, but these courageous individuals are saying, ‘Shell No’.  Every minute that brave protesters can delay Shell’s Arctic drilling plans is another chance for President Obama to reconsider his disastrous approval of oil drilling in Alaska.”

President Obama gave his approval for the oil giant to go ahead with Arctic drilling last month, provided “rigorous safety standards” are met – but environmentalists have argued that Shell failed routine inspections.

Faith Gemmill, executive director of Resisting Environmental Destruction on Indigenous Lands, commented, “Shell’s Arctic venture is seriously reckless. This company has no capability to address an oil spill in unpredictable ice conditions and has proven in previous attempts that they are not equipped for the harsh and volatile conditions of the Chukchi Sea.”

Shell pulled out of its plans in 2013 because of safety concerns and it had to wait to check whether its equipment was suitable for the operations in the Arctic.