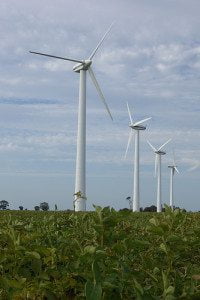 Gusty days could herald a major boost to UK businesses following today’s (11 February) launch of a new system which claws back currently wasted wind energy. Britain’s largest demand response provider Flexitricity has developed Footroom, an automated service that helps manufacturers and other industry increase demand – and therefore production – when wind farm output is at its greatest.

Flexitricity has been providing “headroom” to National Grid – extra energy from industrial users when there’s not enough coming from traditional power stations – since 2008.  Footroom is the opposite: it’s used when renewable sources are producing more than the system can cope with.

The first system of its kind, the Edinburgh-based business believes it could deliver a productivity boom for the whole of the UK – while pointing towards how the Smart Grid of tomorrow might change our consumption habits.

With the concept now officially adopted by National Grid as Demand Turn-Up, under a draft service agreement released today, Flexitricity’s chief strategy officer, Dr Alastair Martin, says the development marks a significant milestone in the evolution of how we consume electricity.

“Footroom, or demand turn-up, offers tremendous potential to the UK – not only does it put the country at the very forefront of developing and implementing the Grid of tomorrow, but it opens up a world of possibilities for business and for renewables developers,” he said.

“Currently, when the wind is at its strongest, the Grid turns large power stations down or off.  But it can’t turn down all of them, so sometimes it has to turn off some of the wind farms.  This wastes a free resource.

“With Footroom, businesses can boost productivity for minimal extra cost and are incentivised to do so. In turn, the Grid can increase the amount of electricity distributed to homes from clean, renewable energy sources.”

The service works by sending a signal to connected businesses, notifying them of an approaching increase in wind and the opportunity to increase demand.  Those who do respond receive a payment in addition to the extra electricity.

The UK has an enviable wind resource, with Scotland the windiest country in Europe – boasting around 25% of Europe’s overall wind resource. In 2014, enough electricity was generated from Scottish wind turbines to power 164% of the country’s households.

Dr Martin continued: “Scotland has a huge advantage as it has Europe’s largest share of this clean source of power. With Footroom, we are able to unlock the potential we cannot currently tap into and help deliver cleaner, more abundant power to our businesses and households.

“This will have a huge impact across the whole of the UK – and could give businesses connected to the system a competitive edge over European competitors.”

He added: “We have to start thinking differently about energy consumption as we try to reduce our reliance on fossil fuels and other polluting sources of energy. Taking full advantage of the free electricity that comes with wind does require a fresh approach, and this system proves that it doesn’t have to be a radical overhaul of how we work, just a modification of how best to work.

“In this circumstance, being an early adopter of Footroom will pay dividends not just now, but for years to come.”