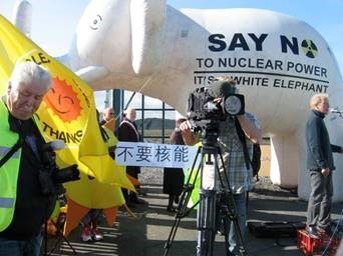 On a beautiful Sunny Friday afternoon at Hinkley Point Dennis Baupin and Molly Scott Cato MEP spoke eloquently in front of the greatest White Elephant in the history of UK construction, Hinkley Point.

Dennis Baupin said: “EDF and Arriva have said they want to build a new design not the one they are building here. A question I want to ask the British Government and the British people. If you know that there will be an iPhone 6 that will be cheaper and safer, why would you want to buy the old iPhone that has never worked and is so expensive?”

Molly Scott Cato said: “In a globalised world I suppose we should consider the option of allowing foreign companies and governments to control our central infrastructure. Well personally I would consider that for about 5 minutes before deciding it’s not a good idea, because it would mean loss of control and loss of security. What do we actually know about these Chinese companies that will be part of the deal?

The Stop Hinkley Campaign has also welcomed the publication of a report which they say demonstrates that the Government’s own data no longer justifies the choice of nuclear power as part of the energy mix.

Using figures from the Department of Energy and Climate Change’s (DECC’s) own ‘Pathways’ website, the report asserts that, far from helping to achieve government energy objectives, the inclusion of the nuclear component will: risk ‘the lights going out’; waste billions of pounds; be less effective in meeting energy policy objectives than a more ‘demand-side-led’ strategy; and leave the ‘urgent need’ for new electricity supplies that the Government claims are necessary unmet.

The report by Together Against Sizewell C (TASC) uses pathways or scenarios based entirely on DECC’s data, to demonstrate that new nuclear reactors – like the proposed Hinkley Point C station – are unnecessary. In fact, far from making government policy easier to achieve, nuclear power’s inclusion in the energy mix they say it will hamper successful policy implementation.

The pathways identified by the TASC document, will: cost the country less than every single government Pathway; more successfully ensure energy security (‘keep the lights on’) than every government Pathway because they rely on less imported energy overall, and less imported fossil fuels; use less energy overall and less electricity in particular;
involve a (slightly) greater diversity of energy supply; more successfully achieve the need to balance demand and supply of electricity at all times; achieve an 80% reduction in CO2 emissions by 2050; ensure warmer homes at less cost; cause less air pollution and less damage to human health.

Stop Hinkley Spokesperson Roy Pumfrey said “The Emperor has got no clothes after all. There are plenty of ways of providing our energy needs which are cheaper than any Government scenario for energy involving nuclear power. The total savings to the UK economy of going for much more energy saving instead could be very large indeed and more successfully reduce greenhouse gases and provide energy security. Nuclear power only hampers the achievement of these objectives.”

Pete Wilkinson, Chairman of TASC pointed out that the government has a legal obligation to justify its increasingly bizarre and incomprehensible obsession with nuclear power. TASC is threatening to take legal action if the Government fails to meet its legal obligation to review its National Policy Statements for Energy.