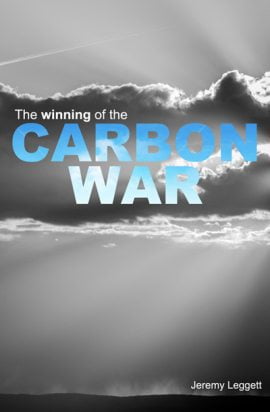 Jeremy Leggett writes: A momentous announcement yesterday. The Bank of England Governor, and chair of the Financial Stability Board, tells the world that climate change is the biggest issue of the future, that fossil-fuel stranded assets are substantial, and that investors must be given the data they need to “invest accordingly”. A one minute BBC video of his comments is here.

Also yesterday, less than a week after Goldman Sachs concludes that “coal is in terminal decline”, the biggest retreat yet from investment on the oil frontiers: a $7bn waste of capital as Shell retreats from Arctic drilling. The BBC Today Programme explores this this with me here, 50 minutes in (although the BBC server seems to have crashed atm!).

As many of you know, the evolving stories to these two dramas, and many other such, are woven into the narrative arc of my serialised book, “The Winning of the Carbon War”, of which there are four monthly episodes to come before the final scene at the Paris climate summit in December. Based on all the evidence in the evolving history, I think it is now likely that there will be a tipping point in retreat from fossil fuels in 2016. Much social good can come from this, if we can collectively manage the retreat in an orderly way. Please download free if you haven’t, and help spread the word about the book if you would be so kind.

The final print version of the book will be available for sale early next year, all proceeds going to SolarAid.

I want to thank the brilliant team at Carbon Tracker, who I have the privilege of chairing. Their work has been of extraordinary influence in what the Guardian calls “the biggest story ever”. It has been my great good fortune to watch their efforts close to, and help chronicle their extraordinary achievements, in among all the other advances being made by carbon warriors of all types around the world these days.