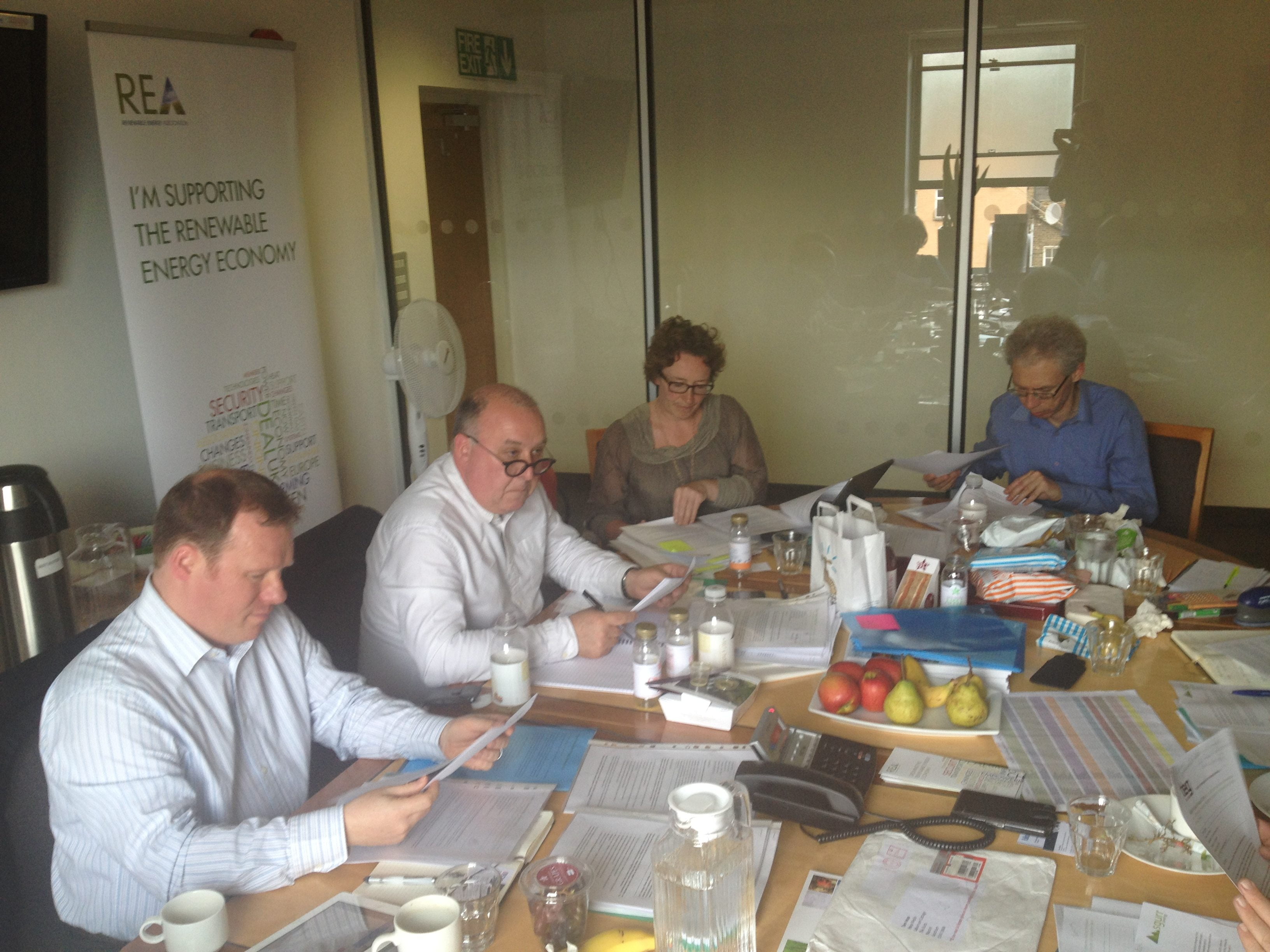 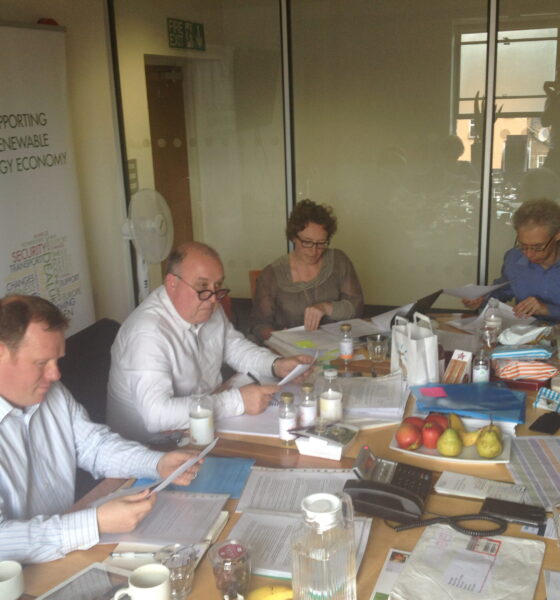 Now in their ninth year, the event celebrates the achievements of companies and individuals who have done something amazing in renewables over the past year.

Ahead of the ceremony on Thursday evening, Blue & Green Tomorrow caught up with five of the event’s judges to find out their thoughts on the future of renewable energy.

Tell us briefly about your current role.

Nina Skorupska (NS): I’m Chief Executive of the REA. I was first introduced as such at last year’s awards dinner, and I’ll be one year into the role on July 29.

Tom Heap (TH): I am a reporter and presenter on BBC radio and television, specialising on environment and rural affairs. My main outlets are Countryfile, Panorama and Costing the Earth.

Rainer Hinrichs-Rahlwes (RHR): I was elected vice-president of the European Renewable Energies Federation (EREF), the voice of independent producers of energy from renewable sources and the umbrella organisation of national renewable energy associations, in May this year.

Doug Parr (DP): I’m looking at technical issues and policy across Greenpeace UK but with a particular focus on energy. That means I try to keep abreast of the challenges facing the transition to sustainable energy in power, heat, transport and other sectors where we are less visible like agriculture.

Simon Leadbetter (SL): I’m the founder and publisher of Blue & Green Tomorrow, the UK’s most widely read and fastest growing sustainable investment magazine. We simplify sustainability for our readers and amplify what it all means to as large a number of people as possible, encouraging them to live, spend and invest more sustainably.

You are on the judging panel for the forthcoming British Renewable Energy Awards. Tell us about your experience at the judging session.

NS: I’m told my first ever REA judging session was actually rather an unusual one. The quality of the entries was not unusual or surprising – with standards just as impressive as ever – but what was surprising was the speed with which the judges, all from diverse backgrounds, reached consensus. It seems this year’s winners stand out head and shoulders above even the best of their peers.

TH: Rigorous yet enjoyable judging panel with each player chipping in with their expertise.

RHR: Very focused and target-oriented discussion. Jury trying to find appropriate prize winners. At the end of the day, we successfully agreed on the prize winners.

DP: It was a really focused session where the discussion was tight and we rapidly were able to get to the winners, except in some cases where it was a close call. It was great to see all the good work that was going on.

SL: A great judging session with a remarkable consensus on who should be the winners. It’s incredibly motivating to see so many companies and individuals doing so much to tackle our greatest problems – climate change and the limits on unsustainable growth.

What could or should the government be doing to boost renewable energy in the UK?

NS: Clear, stable policy is key. Policies need to find the balance of not being too complicated, so that all the different players in renewable energy can work with them, whilst being sophisticated enough to respond intelligently to changing market circumstances, avoiding the need for knee-jerk interventions. It is not easy, and government has made some good progress, but there is a long way to go yet.

TH: Not undermine it with rhetoric or political posing, and that applies to the opposition, too.

RHR: Create stable and reliable framework conditions for all renewable energy, in particular conditions which would encourage new market entrants and independent producers of energy from renewable sources. Overcome nimby (“not in my back yard“) and banana (“build absolutely nothing anywhere near anyone“) approach and explicitly facilitate deployment of a smart mix of decentralised (and some centralised) production, in particular encouraging onshore wind and all forms of community power initiatives. And finally, extremely important to avoid stranded investment and unnecessary costs, take clear and unambiguous decisions aiming at system transformation towards a renewables-based energy system.

DP: Treat it with respect as a major part of the solution to our energy issues. Support for renewables (unlike for nuclear or for fracking) has been grudging and apt to change at short notice, and only done because of the EU target. Instead of seeing it as substantive, bankable, and better than their preferred options.

SL: Start taking a lead globally. Ditch the naysayers and scientifically illiterate sceptics in high office and make the UK the global epicentre of sustainable innovation. The first duty of government is to protect it’s citizenry, and the greatest threat to our national security is climate change and resource scarcity in minerals, food, energy and water.

What single technology do you think has the most potential to change the energy sector for the better – and why?

NS: Well, I can’t play favourites from within the renewables family! So I’ll be a bit cheeky and say storage. When we can combine the intermittent technologies – wind, wave, solar – with efficient storage solutions, we will see a step change in the technical challenge of integrating these technologies into the energy system, in the economics of these technologies, and in the ability of on-site generators to greatly increase their independence from rising energy bills.

TH: Tidal: it is a consistent renewable where the parameters are known. Energy storage has to escape its current state of neglect.

RHR: There is no such single technology. What we need is a paradigm change – away from fossil and nuclear baseload driven energy systems and markets, aiming at a flexible and smart mix of all available renewable energy sources: wind, solar, biomass, hydro, geothermal, wave, tidal. Power grids and energy markets (including heating and cooling and transport sectors) have to be redesigned accordingly.

DP: Hard to pick one as there will be several competing. Offshore wind could be huge; so could solar depending on price reductions. Both will need moves on power storage and grid management to gain full potential.

SL: Time travel. To travel back 30 years to actually do what we needed to do then, to stop us from arriving in the hole we’re in today. Seriously, though, I’m a huge fan of harnessing the power of the sea through tidal, wave, offshore wind and ocean thermal. We’re an island nation that built an empire out of our respect and mastery of the sea. It’s time we mastered the sea’s huge potential to power our much smaller nation.

What do you think the national energy mix will look like in a decade? What does it need to look like?

NS: There won’t be any new nuclear plants yet. There will be some new gas plants but no carbon capture and storage (CCS) at scale, and a small amount of UK shale gas. There will definitely be much more renewable energy, because it is generally much quicker to deploy than the other low-carbon options. The biggest step change will be in heating. Compared with 2013, renewable power and transport fuels need to treble between now and 2020, while renewable heating needs to increase five-fold. What it really needs to look like is an energy system with renewables and energy efficiency at its heart.

TH: Not a radical change from today unless we see a meaningful carbon price (which might push out coal) or a sharp jump in fossil fuel costs. A steady increase in the proportion of renewables ‎is likely due to government incentives and subsidies and gradually lowering technology costs.

RHR: There will be more offshore wind, some more solar PV, and there will be deplorably little capacity of onshore wind. Anaerobic digestion (AD) and other biomass (including for heating) will make some good progress. The UK will still not have reached a share of 15% renewables in gross final energy consumption, although this should have been achieved by 2020 already. There will be power outages (or close to), because the grid system will not be adequately adapted, due to incompatible policy incentives. By 2022, the UK government will announce that costs for Hinkley Point C will be – at least – 30% higher than expected and that the power plant will not be ready before 2030. Shale gas projects will have consumed a lot of money, spoiled the environment, but not have produced a relevant amount of unconventional gas. It needs to be led by Wind and PV, which probably could cover around 50% of the UK’s electricity demand: biomass, hydro and some geothermal – heating and electricity – the first wave and tidal projects at commercial scale, gas providing balancing power where needed and the remaining coal and nuclear power plants being phased out, freeing the grid from inflexible production.

DP: It will have a lot more renewables in the power sector; heat use will continue to decline, as will oil use in transport. I’m not certain there will be a massive penetration of renewables in either of those latter sectors, but the platform will be set for them to be much, much larger later in the 2020s, with substantial electrification as key.

SL: I think the short sightedness of our energy policy will leave us over reliant on fossil fuels, when we could have led the world in offshore energy and clean technology. It needs to be a diverse combination of non-centralised renewables, community-owned installations, well insulated residential and commercial properties and a significant take up of energy efficiency products and services.