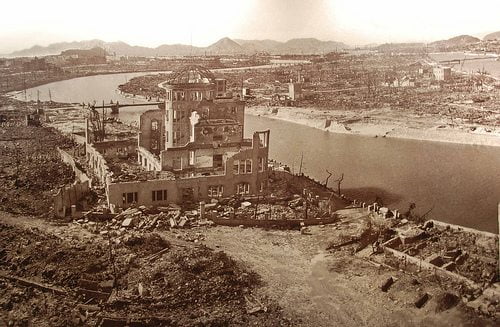 Sixty-eight years ago today, one of the most catastrophic and memorable acts of warfare occurred in Japan. To many looking in from the outside, the Hiroshima bombing signalled the end of the second world war, as well as serving as a demonstration of the ruinous effects of nuclear weaponry. But to the Japanese, however, August 6 represents one of the darkest moments in the nation’s history.

The original effort towards nuclear energy as a weapon really began in the second world war. The American scientists in the Manhattan project developed the first atomic bombs, along with assistance from Britain and Canada. Known colloquially as the ‘physicist’s war’ (due to the scientific rivalry between the allies and the Soviets), the Manhattan project saw the unified effort of US, British and Canadian science devise a new military weapon – chemical warfare.

The bombs differed in terms of their material content and destruction method. Little Boy shot one piece of uranium-235 into another, thus creating an explosion upon impact. Fat Man featured plutonium as its core material, and imploded on detonation.

That same day as Fat Man destroyed Nagasaki, the USSR declared war on Japan. On August 10 1945, the Japanese government surrendered.

This brought an end to the second world war and also to nuclear weapons – at least in terms of their detonation, if not their production. Instead, nuclear energy began being harnessed to produce energy.

The first nuclear reactor to produce electricity (albeit a trivial amount) was the small Experimental Breeder reactor designed and operated by Argonne National Laboratory and sited in Idaho in the US. The reactor started up in December 1951.

Across the globe, other countries chose the process to help meet their energy needs. The use of light-water was the common application in nuclear power programmes – today, 60% of nuclear capacity is made up of pressurised water reactors (PWR), with some 21% boiling water reactors (BWR).

Such was the popularity of nuclear energy that many plants and reactors were planned for production during the 1970s worldwide. Yet concerns over human health, as well as wastage and proliferation, meant many were cancelled or abandoned.

In 2011, the Fukushima disaster left many questioning the relevancy and future of nuclear as an energy source.

The Worldwatch Institute’s 2011 report, World Nuclear Industry Status Report 2010-2011: Nuclear Power in a Post-Fukushima World, said the nuclear energy industry was beginning to weaken even before the catastrophe. Indeed, nuclear reactor start-ups have been in steady decline since the 1980s.

“The industry was arguably on life support before Fukushima. When the history of this industry is written, Fukushima is likely to introduce its final chapter,” said Mycle Schneider, lead author of the report.

One of the first countries to turn its back on nuclear energy was Germany. Two months after Fukushima, the German coalition government decided to reverse its stance on nuclear energy and bring in plans to phase out all nuclear power plants by 2022.

In June of the same year, the Italian government – which originally intended to have 25% of Italy’s electricity supplied by nuclear energy by 2030 – followed suit, and remains the only G8 country without its own nuclear power plants having closed its last domestic power plant in 1990. Although roughly 10% of Italy’s energy comes from nuclear power, all of it is imported from abroad.

However, China already has four-and-a-half times more wind power installations than nuclear capacity, and in 2011 generated more electricity from wind than from nuclear reactors. Globally, nuclear generating capacity has remained roughly steady for the past 20 years, while the actual output has declined slightly.

In contrast, output from wind, solar, and biofuels experienced tremendous growth over the same period. Furthermore, many of the world’s nuclear plants are fast approaching the end of their viable lifespan, increasing the likelihood that the share of electricity from nuclear power will decline in the coming decades. The Fukushima disaster will no doubt make it increasingly difficult for operators to argue for extensions to the lifetimes of these plants.

The future of nuclear

Many – including Richard Lester of the Massachusetts Institute of Technology – feel that nuclear is a reliable and proven method of reducing carbon emissions and dependency on fossil fuels.

In a TED talk from 2011, Lester says, “It is hard to see how we are going to meet rising energy demands and reductions in carbon emissions without a significant expansion in nuclear energy. To achieve this we’re going to need greatly strengthened nuclear governance.”

He adds that Fukishima “wasn’t so much a technological failure. It was a failure in soft things: people, organisation, procedures and institutions – the things that have to work in order for nuclear to be safe.

“More than 80,000 people [were] forced to leave their homes as a result of the nuclear accident [of Fukushima] and with no prospect of returning any time soon. So what we have is a human disaster, if not a human health disaster.

“There have been no radiation fatalities so far, and even in the long run probably only a very small number. Maybe even none at all. Certainly a total that will be tiny in relation to the 23,000 people who perished in the earthquake and the tsunami.

He concludes, “Nuclear energy is the only low-carbon energy source that is both scalable and already generating large amounts of energy around the world.”

Although the application and continuation of nuclear can be argued, its hazardous concerns certainly merit attention. In March 2011, an earthquake rocked Hiroshima’s lands and inhabitants, destroying villages and destructing buildings.

The effects drew comparisons to the second world war nuclear bombings. “It’s like the third atomic bomb attack on Japan”, said Keijiro Matsushima, an 82-year-old survivor of the atomic bombing at Hiroshima, just after Fukushima happened. “But this time, we made it ourselves.”