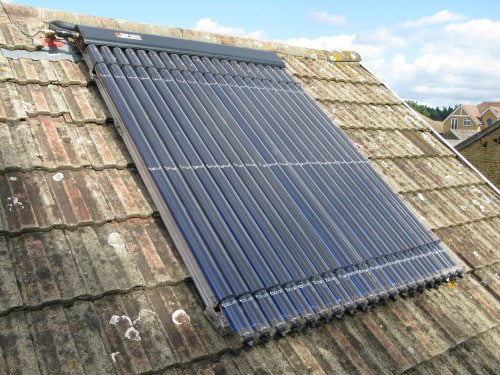 The Government has today published a consultation proposing to end support for solar thermal hot water heating, just as the UK market had started to recover. If the proposals go through the internationally proven technology will be cut out of the Renewable Heat Incentive entirely next year.

This is yet another cut to renewables subsidies after the influential House of Commons Energy and Climate Change committee today heavily criticized the Government for damaging investor confidence in UK energy infrastructure.

The shock proposal comes after repeated statements from Energy Secretary Amber Rudd that renewable heat is the major focus for UK renewables policy given the UK is off track on its 2020 renewables targets. In 2014 green sources provided only 4.8% of the UK’s heat, which puts the UK way behind its self-imposed target of 12% renewable heat by 2020. It also follows warnings by the Committee on Climate Change that greater effort is needed on renewable heat.

Solar thermal is one of the most established and accessible renewable energy technologies with over 350GW of global capacity, considerably more than the global capacity for solar PV. Its applications have expanded into space heating, community heating, district heating, hotels, hospitals and industrial processes. Solar thermal also works effectively alongside other renewables technologies.

Paul Barwell, CEO of the Solar Trade Association commented: “This proposal simply doesn’t make sense. The government acknowledges the many benefits of solar thermal, yet proposes singling it out for the removal of financial support. With UK renewable heat deployment falling desperately behind target, government should be full square behind this technology as part of a strategic plan to permanently bring down heating costs for British families.”

“Discriminating against this globally important technology in the UK would send a terrible message to householders, and it would have very serious ramifications for the British solar thermal sector. Manufacturers of solar thermal equipment, including cylinder manufacturers as well as installers, risk a full scale winding-up of their sector. We are urging government to think again, particularly since sales enquiries are on the rise.”

The technology is therefore popular with social housing associations in the UK to help tackle fuel poverty.

Gordon Watts, Sustainability Manager at South Yorkshire Housing Association said; “The use of solar thermal panels to provide hot water in some of our existing housing schemes helps to keep our customers’ gas bills down, and this technology and other renewables continue to be important options we consider as part of our stock development and improvement plans. Continuation of the Renewable Heat Incentive and the Feed-in Tariff is important for solar thermal and other renewables until these markets more fully mature.”

The proposal is doubly surprising because of the Government’s stated intention in the consultation to ensure less-able-to-pay households can benefit better from the Renewable Heat Incentive scheme. Unlike other renewable heat technologies solar thermal has negligible running costs, can be added to existing heating systems, and its performance does not depend on investing in a highly insulated house, making it particularly well suited to homes in fuel poverty. It also works effectively in built-up urban areas and on smaller roofs, broadening the opportunities for British homes to invest in renewables.

The proposals also put at risk precious domestic manufacturing in renewables as the UK has a number of excellent solar thermal manufacturers such as Viridian in Cambridgeshire, AES in Moray in Scotland, Thermatwin in Manchester and Solar UK in Sussex.

The UK solar industry is particularly aggrieved by the proposals, as the UK solar thermal market, which is dominated by domestic systems slumped during a policy hiatus lastingfrom 2010 to 2014. It was not until the first half of 2014 that the Renewable Heat Incentive was introduced for domestic solar thermal, by which time the market had halved in the UK, leaving the industry in a weakened position to promote sales. Analysis by the STA shows that there has been an 88% increase in monthly solar thermal sales enquiries amongst its membership compared to this time last year.

The justifications for removing solar thermal in the consultation proposal are weak, including survey results that show that most of the homeowners who have already installed solar thermal say they would have done it without any subsidy. However the relatively small size of the current market means that these survey interviews are not representative of a mass market – many homeowners who are currently choosing to go solar are not motivated by financial return.

Solar thermal is well established in colder and less affluent Eastern European countries because of its ability to provide effective renewable heating. For example, per capita, Poland has four times and Slovenia seven times the capacity of solar thermal than the UK. Germany has 20 times the solar thermal per head of population.

Previous analysis by the Solar Trade Association has shown that while solar thermal is already relatively affordable, costs can be reduced significantly given a strong domestic market.

The Solar Trade Association is calling on the government to allow solar thermal to contribute not just to hot water but also space heating (such as central heating systems) and still qualify for the Renewable Heat Incentive, so that the technology can be combined with biomass boilers and heat pumps. Now is the time to ramp up support, not remove it. Red tape has hindered the roll out of solar thermal and the STA is asking Government to remove this.