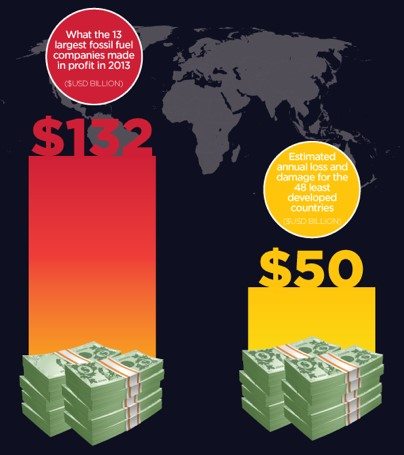 Paris Agreement Effect: A Call For Fossil Fuel Industries To Pay For Their Climate Damage

In the wake of the Paris Agreement on climate change, representatives from over 60 organisations across the world today called for a levy on fossil fuel extraction to help pay for climate impacts in the most vulnerable countries.

The declaration says even keeping warming to 1.5˚C, as more than 190 governments have agreed to,  will not stave off some climate impacts already being felt by the most vulnerable nations.

It has been has signed by a list of over 60 individuals and organisations, including the Seychelles Ambassador to the UN, Ronny Jumeau,  scientists such as Naomi Oreskes,  leaders of environmental organisations such as Kumi Naidoo (Greenpeace), Bill McKibben (350.org), Samantha Smith (WWF), Mithika Mwenda (Pan African Climate Justice Alliance), author Naomi Klein, Yeb Sano of the Philippines, Saleemul Huq of  International Centre for Climate Change & Development, Bangladesh.

It points out that fossil fuel companies are causing more than 70 percent of the climate change today.

“These big oil, coal and gas companies are continuing to reap millions in profit, while the poor are paying with their lives.  While the Paris Agreement sends a strong signal that fossil fuels must be kept in the ground, on the way to that goal, these companies should be paying for the damage they’ve already caused,” said Julie Anne Richards of the Climate Justice Programme, campaigning for a Carbon Levy.

The signatories vowed to work toward an agreement that would see a global levy on fossil fuel extraction – a Carbon Levy – to help mobilise funds to provide compensation for the damage.

Indeed, these companies were not only responsible for climate change, but many of them had, for years, supported campaigns denying climate science, in order to slow government action.

“We support work by allies on legal strategies to bring the fossil fuel industry to account for the damage their product is causing.  And it is crucial to ensure that fossil fuels are phased out and replaced by renewable energy by mid century,” Ms Richards said.