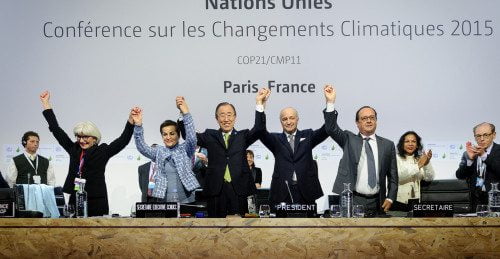 In the run-up to PennWell’s annual POWER-GEN Europe and Renewable Energy World Europe* in Milan this June, conference director Nigel Blackaby examines the key themes that will drive the debate – with change at the heart of the agenda like never before. The COP21 climate talks in Paris were an important milestone in the battle to control climate change.In a show of overwhelming consensus, global leaders agreed to keep temperature rises well below 2°C above pre-industrial levels, and to pursue efforts to limit the temperature increase to 1.5°C above pre-industrial levels by 2100. But while the Paris Agreement is certainly an impressive demonstration of collective will, it’s important that we understand that the real work starts now. We need to truly unpack what the Agreement will mean in practice, how it will affect the power industry in Europe and what policymakers and practitioners need to do to respond.

In short, we need to ask ourselves: what now? Has the Agreement sped up the green transition and the role of renewable energy? Does nuclear still have a role to play? Is coal dead or can carbon capture fuel its renaissance? And perhaps most importantly, where does that leave gas fired generation as the bridge technology to get us to this decarbonised energy system? It’s relatively cheap and available, and new gas plants are increasingly efficient and low in emissions. But is that enough without a stronger carbon market?

These are all crucial questions the industry needs to find an answer to. And these answers are now more important than they have ever been. While the last few years have seen much soul searching over the implications of the energy transition, 2016 is the year when we should start seeing the transformations the industry has been contemplating come to fruition.

Supercharging storage Energy storage is a great example, with huge implications for the power sector. This could be the year when energy storage achieves its breakthrough – creating a seismic shift in energy generation, delivery and consumption. We are at a critical pivot point for the industry as a whole and there is growing optimism for a variety of storage technologies.

If the industry can get the storage issue right, both in the scale and cost, the green transition moves from aspiration to reality. The ability to store large amounts of electricity generated from renewable sources creates the buffer needed to offset the intermittent nature of wind and solar energy. This is the role currently being played by traditional baseload generation power plants, which were not designed for this purpose.

At the other end of the supply chain, a breakthrough in storage could very quickly see swathes of savvy households becoming totally energy neutral. There are already signs of real technological advancements. Improved, higher capacity batteries are coming to market, at a more affordable level. And not just at the top end of the market. We’re also seeing attempts to innovate at the consumer level.

Take the Tesla PowerWall, for example. A home battery that charges using electricity generated from solar panels – or the grid when utility rates are low – and stores energy to power homes in the evening, it quite literally devolves power to the consumer. Such is the importance of this issue that an entire day of this year’s POWER-GEN Europe and Renewable Energy World Europe conferences will be dedicated to energy storage and its impact on the power industry. A viable and cost-effective energy storage mechanism could help manage the peaks and troughs of demand, ending the frequent need to quickly ramp up supply, and changing the game for renewables integration and the energy industry as a whole.

It’s not just energy storage that’s changing the game. Change is gathering pace in all areas of power For instance, as more types of generation come online – including from more localised sources supported by battery technology – the need to balance supply and manage intermittency has driven increased interest in the development of smart grids. Traditional energy grids were not designed to deal with two-way power delivery and extensive decentralised generation. Newer, smarter grids need to deal with devolved power generation, at a consumer level, as well as spiky generation from sources like renewables, while closely managing a far more complex infrastructure matrix.

By incorporating more intelligence into the power grid and distribution networks, operators and utilities can react more quickly to changes in demand. If the grid has in-built intelligence and communications capability, then it can react more quickly to peaks and troughs in demand, and send messages to the parts of the system necessary to reduce or ramp up both power supply and demand as required. Replacing today’s infrastructure with a complete smart grid is a vast undertaking but it holds the key to unlocking the energy cloud of tomorrow. Change is the only constant Of course change and modernisation have their challenges. For one, they come with a hefty price tag, and so the industry must always consider how to finance the investment needed to meet these demands. Developers and financiers will meet at POWER-GEN Europe and Renewable Energy

World Europe to negotiate such deals. But that’s not the only issue the industry faces. Indeed, making decisions about big investments in power generation is difficult, especially when faced with increasing policy uncertainty – both at a national and international level. This is an issue that players across Europe must contend with. Germany is often praised for leading the way when it comes to energy policy, yet its volte face on nuclear perfectly illustrates the fact that when it comes to power, the ground is ever-shifting. And while its ambitions on emissions are laudable, the decision last summer to mothball large amounts of brown coal and to create a reserve capacity, instead of imposing a planned emissions levy, shows that the industry must be prepared for unexpected policy decisions around every corner.

Yet 2016 is a year to be optimistic. Increasingly, the world is favouring electricity as its energy media of choice. Europe’s power engineering concerns are positioning themselves to meet the new market challenges, new entrants are injecting fresh ideas and thinking into the sector creating momentum in an industry ready to embrace the opportunities of change. The future will be a more innovative, more efficient and more effective powering of people’s lives and businesses. The real question we’re looking to answer in Milan is, in a post-Paris world, how quickly can we get there?