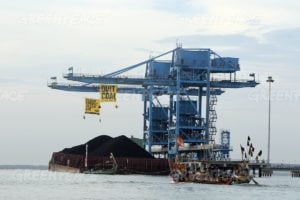 The supply of coal to Cirebon Coal Power Plant in Indonesia was blocked by protesters on Sunday. Greenpeace Indonesia activists scaled the cranes of two ship unloaders as part of the ‘Break Free’ actions which ran for eleven days. Indonesia is the world’s second biggest exporter of coal and activists are demanding that governments stop exporting coal, oil and gas altogether.

The activists unfurled banners saying ‘Quit Coal’ and ‘Clean Energy, Clean Air’ from both cranes supplying the coal terminal and urged the government to immediately transition towards renewable energy. Communities near the coal power plant have protested its expansion plans since last year.

Arif Fiyanto, Climate and Energy Campaigner at Greenpeace Indonesia said: “Every new coal-fired power plant means elevated health risks for Indonesians. Lives, including those of children, are cut short due to strokes, heart attacks, lung cancer and other cardiovascular and respiratory diseases.

“Coal has a dirty history in Indonesia ranging from land grabs, violence against local communities, polluting our air and exporting climate change to the rest of the world. The time is now for ordinary Indonesians to show the government and foreign investors in our dirty coal industry that enough is enough.”

Air pollution from coal in Indonesia has had a devastating effect on the country’s health. According to a study Greenpeace Indonesia released with Harvard University researchers last year, existing coal plants in Indonesia already cause an estimated 7,100 premature deaths per year.

The first unit at the Cirebon Coal Power Plant, in operation since July 2012, exploded in September 2014 causing injury to several workers. The expansion plan will be funded by the Japanese Bank for International Cooperation (JBIC), the same bank behind another controversial coal power plant at Batang.

Arif Fiyanto added: “President Jokowi has a choice: stay with a business-as-usual approach to generating electricity and see the lives of thousands of Indonesians cut short, or lead the rapid transition to safe, clean, renewable energy.

“It is unthinkable for the government to expand fossil fuel projects following the Paris agreement. If we are to keep the average global temperature rise to well below two degrees, we must urgently end subsidies for fossil fuel companies and transition to 100 per cent renewables.”

Sunday’s action follows a protest on May 11 by over 3,500 people in Jakarta, led by people from several communities outside the capital who are resisting coal projects in Indonesia. Greenpeace is joining other NGOs and affected communities in South Africa, the Philippines, USA, Canada, Spain, and other coal affected countries as part of the ‘Break Free’ movement.