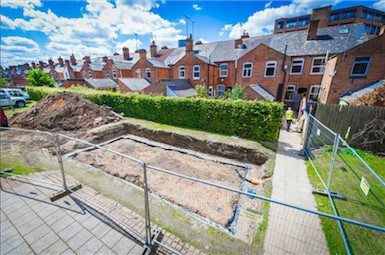 A research project between sustainability specialists Caplin Homes and academics at De Montfort University (DMU) could pave the way for more affordable low and zero carbon properties in the UK.

Based around Caplin Homes’ patented inter-seasonal heat store, the Earth Energy Bank (EEB), the scheme aims to study the effectiveness of the technology within a retrofit setting, where the building envelope is relatively inefficient. DMU’s Institute of Energy and Sustainable Development (IESD) will be monitoring the performance of the traditional terraced house, which is located just yards from the university’s city centre campus.

The project has also gained support from Europe’s largest heating technology manufacturer, Vaillant, whose new 3kW geoTHERM mini heat pump has been installed within the property. Designed for retrofitting to multi-occupancy buildings, the geoTHERM was first installed in a high-rise property in Manchester but the company is keen to apply it to new build applications.

John Bailey at Vaillant commented: “Renewable technology is an area we’re hugely committed to as a business. We believe ground source systems have a great deal of potential and the Earth Energy Bank could be a real stepping stone to their more widespread adoption.”

As a cost-effective alternative to traditional ground-loop or deep bore systems, the EEB makes achieving low and zero carbon much more affordable. Its creators believe a system such as the one being trialled by DMU could be a viable option for social landlords.

Michael Goddard, director of Caplin Homes, explained: “This project will allow us to demonstrate how the technology could work in a whole host of new build properties, especially in low rise, multi-occupancy housing developments.

“Ground source heat pumps are one of the most efficient renewable technologies available but their current applications are restricted by the lack of space for ground collectors or the cost of deep bores. The Earth Energy Bank could change all that and this installation offers us an opportunity to gain insightful data for further system modelling.”

This project builds on the two years of data from the successful operation of the Solar House, the UK’s first fully solar powered new build home. Previous installations have seen the energy store housed within a building’s footprint; however, as a retrofit project, the EEB in this instance was fitted within a bank of land at the back of the property.

Consisting of a matrix of boreholes approximately 1.5m deep, the EEB utilises the high thermal capacity and poor conducting qualities of the earth.

Because the project is housed in an existing terraced house, the EEB has been specially insulated so it could be located beneath a lawn on the campus. It works in conjunction with the geoTHERM Mini heat pump and a solar array housed on the building’s roof. Surplus energy generated during the summer months is used to warm the energy store, which is then drawn upon to heat the home in winter.

The IESD has taken an academic interest in the development of the EEB since its initial installation in the Solar House. Energy flows within the house were monitored for 12 months by an MSc student, who has produced a full report on its performance.

Dr Rick Greenough, reader in industrial sustainability, said: “The Earth Energy Bank is still relatively new but it could influence the technologies that are used in house building of the future. Having a working model will enable us to undertake further research into the performance of the EEB and our students to see first-hand the latest renewable innovations and explore further applications.”

In addition to the new energy system, the house has also been installed with new double glazed windows and underfloor heating.

Image: The Earth Energy Bank has been installed behind the property