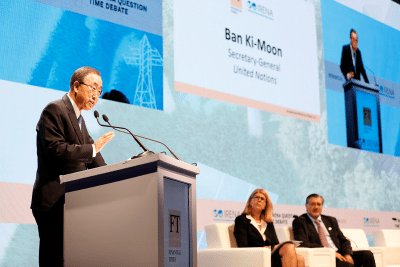 Scaling Up Renewables: Taking Climate Action to the Next Level

Over 500 leaders from government, business and civil society gathered last night at the headquarters of the International Renewable Energy Agency (IRENA) to discuss scaling up renewable energy as the cornerstone of global climate change mitigation. For the fourth consecutive year, the Financial Times-IRENA Question Time Debate provided a unique opportunity to discuss the international renewable energy agenda following the conclusion of IRENA’s annual Assembly.

“After the Paris climate conference in December, global focus is shifting from negotiation to action,” said IRENA Director-General Adnan Z. Amin. “Leadership at all levels is key to achieve and surpass the emission reduction targets set forth in the Paris Agreement. Tonight’s event provided a platform to engage in dialogue, build momentum, and chart a course for a renewable energy future.”

The event featured a special address by Ban Ki-moon, United Nations Secretary-General who spoke about the close partnership between the UN and IRENA since the Agency’s founding nearly five years ago. The welcome address by IRENA Director-General echoed the sentiment of strong collaboration between the two agencies to scale up renewable energy.

Panellists fielded questions on the policy, finance and innovation that can ensure the dramatic increase of renewable energy in the global energy mix.

The event took place immediately following the conclusion of the sixth IRENA Assembly, which brought together more than 1,000 energy leaders from 150 countries to set the global renewable energy agenda and make concrete steps to accelerate the ongoing global energy transition.