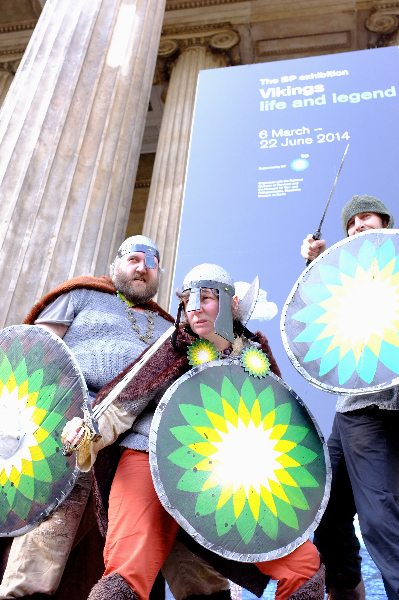 To BP or not to BP? Protest against oil giant’s British Museum sponsorship

Theatrical protest group the Reclaim Shakespeare Company is planning a “Viking invasion” on June 15 in protest against a BP-sponsored exhibition at the British Museum.

The campaign is said to be the ‘grand finale’ in the latest series of protests by the group, which include the creation of a spoof Viking film and a petition calling for the end of BP’s sponsorship of the British Museum.

The Reclaim Shakespeare Company is inviting the public to join the protest and more than 100 have already agreed to attend. The group has said one of the reasons for holding the protest is “to open the discussion into creating positive social and political action on climate change”.

It added, “After seeing this public outcry in the form of our protest, and the growing public outcry in general, we hope to see the British Museum seriously reconsidering their sponsorship policies and renouncing BP as a sponsor.”

BP is the most longstanding corporate partner at the British Museum, having supported its public programme since 1996.

With BP’s commitment set to continue into 2017, there are rising tensions from a number of campaign groups who want to end the oil giant’s sponsorship of the arts.

Many have campaigned around the country, including a group of dancers from the BP Out of Opera group who protested about the company’s sponsorship of the Royal Opera House back in May. The group argued BP’s association with the arts helps improve its image when attention should be on the environmental damage that it causes.

A spokesperson from the British Museum said about its relationship with BP, “The British Museum is exceptionally grateful to BP for their loyal and ongoing support which has allowed the museum to bring world cultures to a global audience through hugely popular exhibitions and their associated public programmes “.

When asked about their response to the planned protests, the spokesperson added, “The British Museum believes it is more important than ever to deepen people’s understanding of the world’s many and varied cultures and this is something that can be achieved through the temporary exhibition format. It is only possible to develop and host temporary exhibitions with this kind of external support.”

Artists call for BP to ‘get out of the opera’