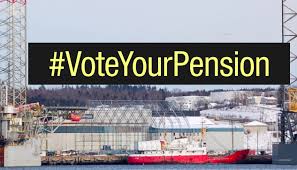 Australia’s largest greenhouse gas emitter AGL Energy is next in line to feel the full force of pension fund members demand for climate action through the Vote Your Pension campaign, developed and managed by London-based Asset Owners Disclosure Project.

The Australasian Centre for Corporate Responsibility (ACCR), Australian campaign group GetUp and a number of ethical financial advisers, have tabled a resolution to be voted on at AGL’s September 30 AGM.

The resolution proposes that Australia’s largest emitter replaces existing plans to phase out coal-fired power generation by 2050 with a strategy of jettisoning coal by 2030, a plan consistent with limiting global warming to 2 degrees Celsius.

“This resolution at AGL is critical in bringing about change to Australia’s pathetic emission reduction targets, which has seen a country, whose former Prime Minister Tony Abbott hailed coal as good for humanity, falling well short of what is expected on the global stage,” says AODP CEO Julian Poulter.

Vote Your Pension enables retirement savers from all over the world to contact the funds managing their retirement saving to express concern over investments in risky and uneconomic assets, such as coal. Funds will then receive notification of this and be asked to respond to their members.

With Australia’s AAA credit rating, shares such as those in AGL are widely held by global asset owners, including UK pension funds. For instance, a member of a UK local authority pension scheme could indirectly own AGL equity through a fund directly investing in the stock, a pooled fund or an index fund.

“Pressure is building on the world’s big polluters and fossil fuel suppliers to take action on climate change as we approach the UN climate change summit in December,” Poulter adds.

AGL’s annual emissions are huge. In 2013-14, the country’s biggest power generator emitted over 40 million tonnes, more than the total emissions in 2013 from the Republic of Ireland.

As well as ignoring the fundamental dangers posed by the large-scale burning of coal to power its generators, AGL, along with its sector peers (Origin Energy and Energy Australia) have persistently lobbied against a national renewable energy target (RET).

“By voting for an economic business plan compatible with 2 degrees, which would result in additional renewable energy generation, pension members are voting for a cleaner and healthier economy,” Poulter says.