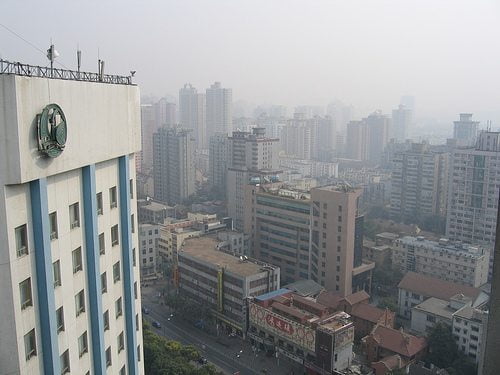 An unnamed eight-year-old girl has become the youngest person in China to be diagnosed with lung cancer, with her doctor saying that air pollution is to blame, according to official reports.

The girl, from the eastern province of Jiangsu, allegedly lives near a busy road. A report that has been reprinted on the website of People’s Daily, the Communist party news outlet, quotes Dr Feng Dongjie as saying that exposure to high levels of the air pollutant PM2.5 is to blame for the girl’s condition.

“Nowhere is safe in this country any more. There are no words, only tears”, one user of Sina Weibo – China’s equivalent of Twitter – wrote.

PM2.5 refers to tiny particle matter that has a diameter of 2.5 micrometers, which can reduce visibility and be a major health concern in high amounts. Fine particles largely come from sources such as vehicle exhausts and the burning of fossil fuels.

The World Health Organisation (WHO) says PM 2.5 is harmful in quantities of more than 20 micrograms per cubic metre. Recent measurements from China have recently found peak levels of over 1,000.

He added, “In other words, if you have asthma, you are more liable to have deterioration of your symptoms in days of high pollution.”

A WHO study published in October classified airborne pollution like PM2.5 as the most widespread environmental carcinogen, finding a correlation between particulate matter and the likelihood of both lung and bladder cancer. It has been estimated that exposure to high levels of PM2.5 were responsible for 1.2m deaths in China in 2010.

In October, the “airpocalypse” – as it was dubbed – made headlines again, as the Chinese city of Harbin was ground to a halt by smog. Schools, motorways and an airport were closed throughout the city.

The Chinese government has pledged to reduce coal consumption and tackle pollution, but the crisis is expected to get worse this winter.