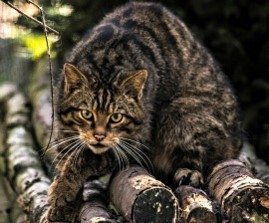 A unique conservation project in Scotland to save one of the world’s rarest animals from extinction has been given a major boost with support from animal welfare charity, Humane Society International.

With as few as 35 animals left in the wild, Scottish wildcats (pictured: by Adrian Bennett) are critically endangered, and inter-breeding with domestic cats is significantly diluting the already rare bloodline. If urgent action isn’t taken, this species will breed itself out of existence.

To save the species, Humane Society International/UK has joined forces with veterinarians at the Wildcat Haven project with a grant to support their work using the tried and tested Trap-Vaccinate-Neuter-Release programme. HSI uses TVNR around the world as a humane, non-lethal method to gradually reduce street cat or dog populations in areas of animal/human conflict, where these animals might otherwise be killed. In west Scotland, TVNR will target domestic and feral cats in wildcat hotspots.

HSI’s support has enabled the project to expand its successful work in the Ardnamurchan peninsula in to the surrounding area of Morvern to create a 500 square mile haven across prime Scottish wildcat territory.

Claire Bass, executive director of Humane Society International/UK, said: “This is compassionate conservation in action to save Britain’s only surviving native feline from the brink of extinction, whilst not harming any domestic or feral cats in the process.

“Our TVNR projects are more usually rolled out in places like Bhutan and the Philippines, so it’s exciting to see it in action to help our own British wildlife. By neutering domestic and feral cats this programme will humanely eliminate the interbreeding problem whilst creating a secure area where Scottish wildcats are given the best possible chance of survival within their own natural habitat.”

In Scotland, researchers and veterinarians will be on-hand throughout the year with mobile veterinary clinics to vaccinate, neuter and health check feral and domestic cats. Local residents who participate will have their companion animals neutered and vaccinated free of charge.

Dr. Paul O’Donoghue, chief scientific advisor for the Wildcat Haven project, said: “Wildcat Haven has always been about striving for exceptional animal welfare standards and delivering compassionate conservation that keeps wildcats where they belong, in the wild.

“This is a critical time for the wildcat but also an exciting one as the Haven project is really building momentum. Not only is the haven area expanding year on year, but by launching a new crowd funding approach to buying nature reserves for wildcats, we are now offering an opportunity for everyone to get involved and play their part in saving one of the rarest animals on the planet; time is tight, but we can still save this animal.”

Wildcat Haven has identified six areas in the Scottish Highlands, where the wildcat has the best chance of survival. To date, the TVNR project has covered the 300 square mile peninsula of Ardnamurchan in the West Highlands, and in the last year alone the project has vaccinated/neutered more than 51 cats— an excellent achievement in a challenging, remote area of west Scotland.