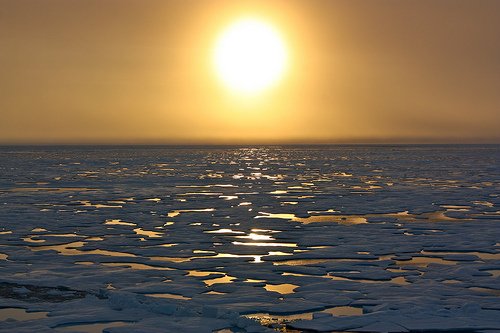 Disturbing statistics have emerged detailing the staggering extent to which one of the planet’s most vulnerable regions, the Arctic, is melting.

As NSIDC’s website states, its “research and scientific data management activities are supported by NASA, the National Science Foundation (NSF), the National Oceanic and Atmospheric Administration (NOAA), and other federal agencies, through competitive grants and contracts”. Clearly, this isn’t just another green protest group.

The fact that this record has been set in August – nearly three weeks earlier than the 2007 low – has led experts to predict that ice could melt ever further between now and the end of summer.

“By itself it’s just a number, and occasionally records are going to get set”, said NSIDC scientist Walt Meier.

“But in the context of what’s happened in the last several years and throughout the satellite record, it’s an indication that the Arctic sea ice cover is fundamentally changing.” 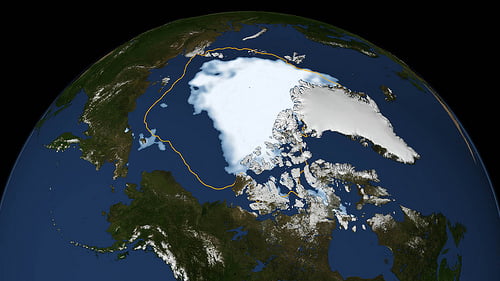 The melting of Arctic ice: the line shows the average minimum extent of melting from 1979-2010, as measured by satellites. Photo: NASA Goddard Space Flight Center via Flickr

Put simply, white ice in the Arctic acts as a massive mirror, reflecting sunlight and its associated heat back into space. As the temperatures in the region increase, the ice melts, leaving the sun’s rays to beat down onto the dark water.

In turn, this creates a vicious cycle or falling ice cover creates more temperature rises equalling even less ice in subsequent years, which is evidenced by year-after-year of falling ice cover.

“The Arctic used to be dominated by multiyear ice, or ice that stayed around for several years”, Meier added.

“Now it’s becoming more of a seasonal ice cover and large areas are now prone to melting out in summer.” 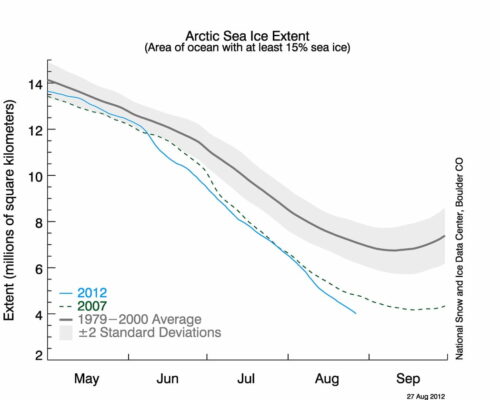 Despite the severity of the news, other issues appear to have eclipsed it in terms of importance, as writer George Monbiot noted on Twitter: “We spend the day on which the #Arctic icemelt breaks all records discussing where the next runways will be.”

A number of companies view the Arctic ice melt as a potentially lucrative business opportunity, including oil and gas firm Cairn Energy, which today announced its intention to continue its search for oil in the region.

This is despite it having already endured two years of fruitless exploration, and suffered a $50m pre-tax loss in the first half of 2012.

“Cairn’s lack of concern for the fragile Arctic environment is outrageous”, said Paul Daly, corporate accountability campaigner at Friends of the Earth Scotland.

“[It] shouldn’t be drilling there in the first place, and indeed couldn’t be were it not for the fact that climate change is opening up this territory by shrinking the ice caps.

“Cairn [says it] will only proceed if [it] can find a financial partner willing to share the risk.

“Whether [it] can find a partner willing to take such a considerable financial risk is questionable, but if [it does] we are all faced with the risk of the utterly devastating consequences of a spill in Arctic waters.”

Daly urged the company to abort its intentions to continue its oil explorations in the Arctic in favour of developing less carbon-intensive forms of energy, but whether Cairn will listen is under debate.

In addition, the risk of any such exploration is heightened as we go through a period of melt, as free-flowing ice in the form of icebergs is far more dangerous than the static ice historically found in the pre-melting period.

The NSIDC figures are arguably the clearest sign yet of global warming, and ought to act as a more than sufficient motivating factor for the world to develop cleaner technologies and invest more sustainably.

Failure to do this will almost certainly provide our children and grandchildren with the unenviable and near-impossible task of cleaning up after us. And anyone with an inch of nous should not want to pass this buck.